Pretty sparklies.  I almost don't want to shoot them.

First off, thanks to Bob for hosting this event at his private gun club.  Man that place is awesome.
We had a really great time at Dallas Area Blogshoot III.  Only three fifths of the BAR clan originally intending on going made it.  Belle and Bootsie both caught some type of crud and went down for the count.
So it was yours truly, Sonnage and Duh* representing BAR at the shoot.
While my childrens haven't become avid shooters, I'm pleased that when invited they are always game for a bit of shooty goodness.
We spent more time shooting pistols than anything else. 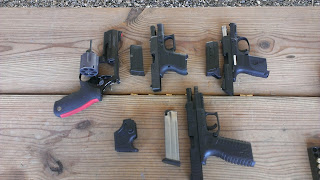 We brought a few hand toys with us.  The most "amusing" was the Taurus .44 mag revolver Sonnage brought with him.
It has a very light frame.  Shooting cowboy action loads out of it was not so bad.  The recoil from the  "real" loads was horrific. 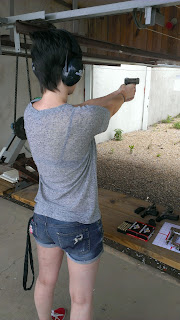 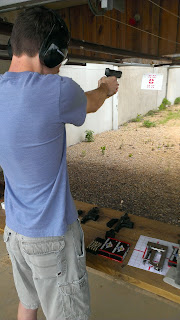 Those two are so calm, cool and collected handling firearms, I had to ask if they were having a good time.  A positive response brought a smile to my face.

It wasn't all business at the range though.
Wait, what? What are you doing back there child? 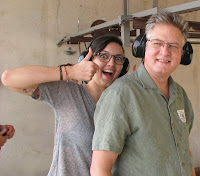 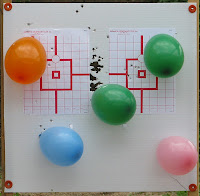 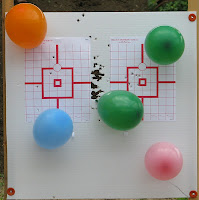 Those buggers just won't sit still in the wind and let you shoot them.  We had a little game of "one shot"  to see who could pop the most balloons with a handgun.
Srsly? I missed? stoopid wind. 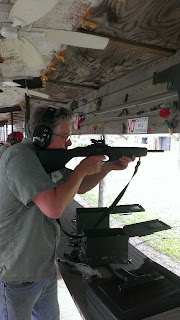 The Redneck Engineer brought a 9mm carbine with him.  I didn't mention this to him, but prior to the Great Ammo Shortage of '13 I'd periodically been shopping for a 9mm carbine.  This one had a red dot site on it too! I've never shot a red dot sight in real life. Man that was cool!  That's your's truly shooting at steel targets.
The sight was having some issues.  TRE said he thought the battery was about to crap out.  It was off by one full steel target to the left. So I just adjusted and aimed one steel target to the right. Plink. Plink. Plink.
The far right target was the more challenging to hit, as I had to eyeball the offset.

I learned that while my son had been taught to shoot a rifle by his Grandfather, my daughter had never shot a rifle  before.  Our gracious host acquiesced to my request to provide a bit of tutelage to Duh in the fundamentals of rifle shooting. 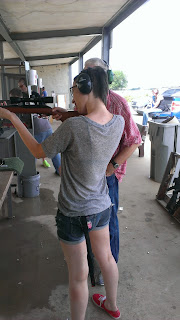 Ugh.  I was trying to get a good pic of Bob S. and Duh stepped right in the way.
Duh shoots one of Bob's .22 LR rifles.

Later, My son and I brought out the .22 LR Ithaca saddle gun to do some plinking at steel targets.
That little rifle is older than he is, by quite a bit. I think I bought that when I was 18 just because I thought it was cool.  I had no real idea at the age of 18 as to what I was going to do with it.
This might be the 4th or 5th time it's actually had rounds run through it.
Now I know.  It was so my future son and I could flatten lead on steel disks....some day. 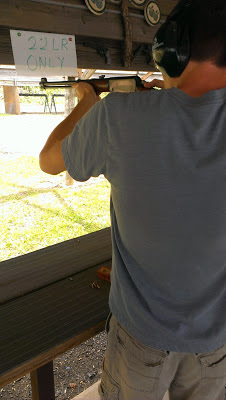 Belle's Tokorev didn't make the trip.  Someone, ahem, didn't maintain her rifle properly after the last time it was shot.  In a word, RUST.  Rust in bad places. Shame. Shame. Shame.  If she doesn't do better, I'm taking possession of said rifle.
Having a plethora of 7.62 x 54R ammo, I brought that to cycle through Bob's Mosins.
I brought way more than I was willing to shoot. 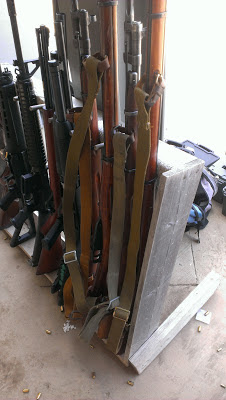 Not shown in the photo are the bayonets on most of those Mosin Nagants.  I found those pointy sticky things to be a bit intimidating.  They were long enough to protrude through the back side of my rather portly figure.

I shot one of Bob's Mosins twice.  I have an exquisite sore spot lingering on my right shoulder as I type this post.
When you shoot a Mosin Nagant, you know you've shot a RIFLE.

In parting, I'll leave you with a video of my reaction to shooting "real" .44 mag loads out of a very light framed revolver.


*  When my grand daughter was learning to talk, she couldn't say "Amanda" and referred to my daughter as "duh".  That moniker stuck for quite a while, but has faded into disuse as the grand child grew and could handle three syllable words.  I'm still kind of fond of the nickname though. It is completely inaccurate nick however.  Duh is not duh.