Nothing good happens after midnight

That's what my elders always told me anyway.  Turns out they were right. So, you don't find me out that late much these days.

Between 7 and 9pm, that's the sweet spot.  In spite of the previous post, Dinner was actually at the Ragin Cajun.  The Big Guy is in town and needed to refuel the Cayenne pepper reactor that drives his gravitational personality.  Jay had two of his mates from work in tow. Really nice guys. They both like Shiner Bock. That makes them OK in my book, I don't care what anyone else says. 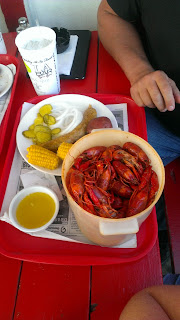 Between Belle and Jay it was hard to get a word in edgewise, but it's just as well. I spent too much time attempting to coordinate the swallowing of  beer while laughing.

While listening to some of the back story of Mr Frogs Wild Ride Jay's ride home from Texas to Florida after DAB II in a 900 mile blinding rainstorm that never made the front page of Listen to Uncle Jay,  I learned that Ogres on motorcycles actually cannot absorb all that much water. Who knew? Right?

Thanks Jay.  We had a great time. Always good to see you.

As for the post title. If you close down the bar, you always see all the other drunks on the road going home. At 9:30 pm the amateur drunks are out after the office "happy hour"  in really heavy traffic running at 70 mph.  I do believe I uttered the word "really?" ten times on the way home tonight.


Protip for young single men: If you like your women on the trashy side, like the song lyric goes, there is some pretty hot trailer trash that hangs out at the Cajun on Friday nights. In herds no less.  Take a wad of cash as bait. They're looking for sugar daddies.