The Eurozone's panties in a wad

Not that I'm defending obummer's NSA, but do you think that the US intelligence apparatus are the only spooks that don't have their fingers in their "friend's" pudding?
Personally, I think the three letter federal agencies have devolved into a state of paranoia wherein they've completely forgotten their fundamental mission statement and are just trying to get one up on all the other foreign, evil three letter agencies around the globe.

Merkel's indignation over Snowden disclosing the fact that her sexting* has been tapped is ingenuous, or she's a rube. I doubt it's the latter.

Together we stand. Divided, we fall.

An Affinity for things Mechanical

If you can quiet your mind and observe and follow written instructions, you can fix just about anything.
These days, someone out there on algore's intertubes has had the same problem you have, and with a bit of searching you can find several possibilities that may be making your car not do what it is effing supposed to do, as in GO.
Sometimes, it just takes a little "fondling" and the "force"

Sunday, after leaving work, I stopped by my son's apartment to lay hands on his ancient and dead Jeep Cherokee.  He and I have been through this "no start" issue several times before.

I took my code reader, my volt / amp meter and some carb cleaner to use as "starter fluid".

No codes came up on the reader.
Pop the hood.
A calm came over my mind.  The Jeep 4.0 liter inline six.  Man that is a great engine.  200+ hp and tremendous torque.
I checked the battery connections then just stood there for a  minute looking.
My hands went to every electrical connection under the hood. Coil to distributor, plugs, injectors, etc., etc.
Meanwhile, the man child pulled the top off the under hood fuse box and started poking them, stating he'd checked them before.
He went to put the cover back on, and I said, " take that back off".
I inspected the fuses for broken links, then began pushing down on each.  One of the "black box" circuit breakers moved, ever so slightly under pressure.
I pulled it out, and re-seated it.
I told him, "that one moved just a bit"...."really?"
"should I try to start it now?"
"yeah, give it a crank"

Sometimes things work out the way you want them to.

Email ThisBlogThis!Share to TwitterShare to FacebookShare to Pinterest
Labels: My GD Car

My favorite thing to do though, is give a response just outside the envelope of polite platitudes.

" well, I'm still on the right side of the grass"*
"I'm still standing"
"I've been better"

Sometimes it's just the facts.

My responses usually take people back just a bit, and then a nervous laugh.  Break the thin barrier of polite platitudes and they don't know how to respond.  If it's someone other than a random passerby, I smile and launch into conversation, rescuing them from their societal confusion.

It's never fails to intrigue me how little it takes to snap people out of their sleepwalk through life, nor how quickly and deeply they fall back into their ambulatory slumber.


* at the age of 19, I was told by someone I admire and respect that I had the attitude of a 90 year old.
I considered that a compliment. I should live so long.

I'm not dead yet!

But I feel like I'm getting close.
Been a while since I posted.  I've been working my ass off supporting the other half of the population on the gubmint dole that refuses to work. Damn vunables.

Come mid next week, I'm finally going to take some vacation days and not work a weekend.

It's been a long, long year so far.

I don't actually smoke. This was staged. I prefer "smokeless" tobacco.

I will never be bored on a long flight again

I'll just take my camera phone into the lavatory....and....
Wait, that seems to be headed in a rather unseemly direction.


I might just have to try my hand at creating
15th Century Flemish self portraits.

It'll never happen. Couldn't happen.   Not to this great Republic.

The Freedom Outpost put up a post suggesting that Sheila Jackson Lee was "suggesting" Martial Law to end the government shut down.

Let's not soft pedal this little leak of information.

Sheila has never had an original "idea" in her entire life.  I have a 22 oz. framing hammer in the garage that is smarter than she is, and can pronounce three syllable words correctly.*

At best ( or worst, as the case may be) Sheila is parroting something she heard "someone" else say.

Do not discount this slip of a "highly educated" moron's tongue.


*Classic Sheila:  Dear sweet lady, Vulnerable is an adjective, not a noun and it is not pronounced "Vunables".

Email ThisBlogThis!Share to TwitterShare to FacebookShare to Pinterest
Labels: 2A, Politics

We've managed to keep the moonbats contained in a fairly localized area.

But, as I've written before, to all you folks with out of state license plates moving down here in droves* for jobs,
Check your progressive politics at the State border.

As a friendly reminder, you shit your bed with your liberal proclivities from whence you came and now it's an impossible place to live  survive.

Ya'll have a nice day.


* Also, learn how to fucking drive without using your middle finger and your horn.  Down here, that is considered impolite, and this not being the people's republic of Massachusetts, the return gesture might not be a middle finger.
Posted by kx59 at 6:15 PM 3 comments:

Email ThisBlogThis!Share to TwitterShare to FacebookShare to Pinterest
Labels: Moonbats

Light at the end of the Tunnel

October twenty-three.
Then I do believe I'm going to burn some of my vacation time.
I apologize in advance, but what a fucking grind this year has been.


I do believe I feel a good one coming on.

I was called at work by the 2nd Amendment foundation again for a donation a few days ago. I never give my credit card info over the phone. I told the guy I'd make a donation online. he said, "I'll give you till Thursday"**. You...will....give....me...till...Thursday?
"yeah"
Second time in a row the 2nd Amendment telemarketers have gotten snarky with me.
Jackass.
I decided not to donate.
Now it's a toss up between writing an ass burning email to the 2A foundation, or just letting my membership lapse and gleefully hanging up on the next caller.

When I was young, I used to feel bad about telling telemarketers "no" and found it difficult to extricate myself from the conversation.  I was nicer then.  I have damn little time, energy or patience  left for bullshit anymore.  What is heard on the other end of the line these days is my fading, "no thanks, not interested" as the hand set leaves my ear on its way back into the cradle.

Is a polite society. So said Robert Heinlein.
I do believe he was correct.
Chicago, gun free-est zone in the world - murder capital of the U.S. continues to devolve.
With a little more work they can catch up to Detroit Wayne County.*

The ultimate game of chicken 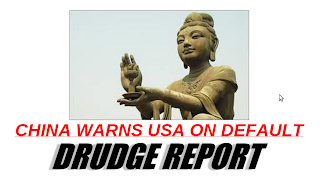 Who will crack first? Boehner or obummer?  Now the ChiComs have enjoined the stand off.
If the GOP can manage to find their balls in their wives' unmentionables dresser drawer, it will be barak.

History, if there is a history of this once great free Republic, will not be kind to bho.
Surely he must know that the only positive legacy he will have is that he was our first black half black president.*
Other than that, it's been a total slow motion train wreck.

*nevermind, I just reread the definition of "narcissist". It's the tea party's fault. It's Boooosh's fault.
HALIBURTON! NO BID CONTRACTS! THAT! WHICH! SOME OTHER DANGLING PARTICIPLE!

My weekend started about an hour and a half ago.*
I'm sitting here reading through the blogs on the BAR blogroll, looking at scout scope set ups for my Mosin** and having a grand time.
I had a nice cold beer in hand and was in the zone thinking of nothing much really.
As I went to the fridge to resupply, it dawned on me. "oh, tomorrow's Monday"

Looks like it'll be another five before some down time.

Well, we must make hay while the sun shines, mustn't we?


*This will be only 25 days straight. Were I younger this would be nothing.  As it is, I'm a bit tarred.
In my younger days it took 13 weeks of back to back 10 and 12 hour days to wear my out this much.

** My  early belated birthday present to myself.

Pissed has the right idea.

Change your travel plans, go somewhere that your worthless obamadollars are welcome.

What if they had a shutdown, and no one came? Or cared?

Meanwhile, those of us that support the lazy, shiftless half with our tax dollars, and pay obama's salary, have work to do.
Posted by kx59 at 8:38 PM 2 comments:

It's the end times for sure

First, the infernal gubmint shut down.*  I think. I'm pretty sure. I can't tell any difference personally.

Now cats and dogs are laying down together. It's just not natural. 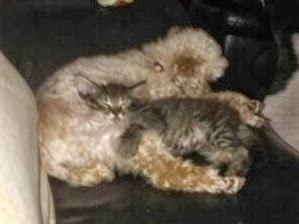 * Obama and Harry Reid want to make this as painful for the American People as they can.
I say let it ride, and we'll see who experiences more pain.  2014 is just around the corner and 2016 will be here before you now it.