You been eating peanuts again?
How such nose hair searing smells come out of such a small animal I will never know. 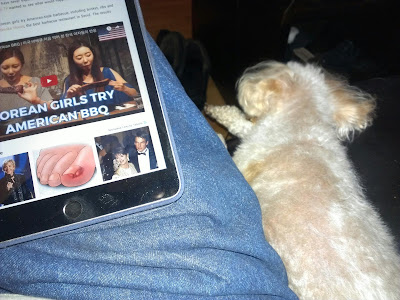 How did Iowa become such an important primary state?

3.1 million people, most of which have vested interest in ethanol.*

There are more people in my county than the whole of Iowa.

This is completely ducked up.

True Love Comes in all shapes and sizes..

Yes true love does indeed come in all shapes and sizes.

I have several true loves..    and yes of course Kx knows ALL about them.

Naturally those of you know know me know that one of those true loves are things that go bang and put a shooty goodness smile on my face...   but of course I am not speaking of that true love...

No..   I am speaking of the truest love you can possibly have and that is the love that you feel for your children, then eventually your grandchildren.

I am in Galveston with my oldest daughter and her son, my little man.

The little man suffered a severe burn on both his legs and his feet due to a household accident about a year and a half ago.  He is three now, 18 months old when it happened.

That being said, he had a laser procedure today and bottom line is, the young man amazes me.  He is tough, he is resilient and through it all, he tosses out the random hugs, kisses and "I love you Nana"s

I am in grandbaby heaven, even if the circumstances aren't the best.

The little man simply warms my heart and its' been a happy couple of days.

Cherish every moment you have with those you love.  Always let them know how much they mean to you and with your grandchildren?   Give them their heart's desire every chance you get.. after all, you don't have to suffer the consequences of a spoiled child... that's mom and dad's job!

Email ThisBlogThis!Share to TwitterShare to FacebookShare to Pinterest
Labels: From the Heart

Back in DC for the day.

Reagan national airport was a zoo.
DC was pretty much a ghost town.

It was still a bit snowish... 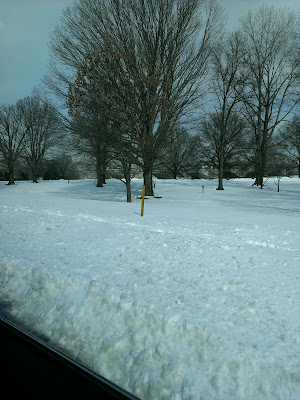 What goes around, comes around

The thought has crossed my mind;  If you, as a business owner, are going restrict my right to carry in your establishment by your legal choice, you become responsible for my safety.

This is not law in Texas, and has not been tested in the courts here to my knowledge, but it seems ethically fair to me.

I can, in my mind's eye, see the harrah! in hoplophobe's eyes everywhere across this great land.  The price of their Starsuck's double grande mocha capuccino latte with a lemon twist is about to go up to cover the cost of off duty cops providing security.

Not sure who the douche nozzle was that posted the pic with the article in the link above, but this is not a proper way to concealed carry.  Unless your goal is to create a new 9mm pathway down your thigh. 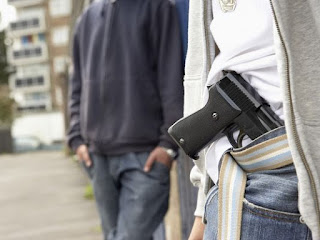 I flew into DC Wednesday night this past week.  It was snowing when the plane landed.
Crikey.
I had been keeping tabs on the weather as always and knew a big snow storm was expected.  Knowing that only meteorologists and economists can keep their jobs being wrong 90% of the time, I was concerned I might find myself grounded in DC for the weekend.
It snowed 1 inch in DC Wednesday.  People were stranded on roads and highways for 6 hours.
It perplexes me that DC has no better snow abatement capabilities than say Atlanta, or Houston.*

Thursday I awoke to clear skies, did my meetings and booked it back to the BAR Corp HQ.

Belle and I have been watching the weather channel off and on over the weekend monitoring the situation.
While the weather channel has named this purportedly record setting winter storm, it appears it was largely an inconvenience, or a day off from work / school.
I read somewhere, that in Wisconsin, they referred to it as "Friday".
From what I've seen, snowmen, snowball fights and sledding were the pastimes of choice to while away the time.

I have heard El Nino in reference to this storm but not Global Worming Climate Change.  Perhaps all the gas has been let out of that bag finally.**


* In 1989, two inches of snow accumulation in Houston which remained for 4 days resulted in 1450 auto accidents over the 48 hour period of Saturday and Sunday.  We don't do snow and ice down here well.

** Remember the ozone hole and CFCs for which we all gave up the more efficient R22 freon many years ago?
Yeah.
The Ozone hole is still there.  For all we know, the ozone hole has been there for the entire lifetime of the earth's atmosphere. It wasn't discovered until the advent of satellites.   But it was an emergency once discovered and obviously due to man's misbehavior.  CFCs being heavier than air tend to settle to the ground. I've not seen any cogent explanation of how they got all the way up there to blow a hole in the ozone layer.
Posted by kx59 at 6:10 PM 2 comments:

A review of sorts.
I carried a hard shell brief case for decades.  The youngins in the office had backpacks or book bags with long straps which I always thought made them look like schoolboys.
Now I think, "the skinny little strap on your book bag sucks. I can see it biting into your shoulder."
Behold my MANPACK!
I ran across this sling pack quite a while back.  When I found out I'd be traveling again, I decided the brief case had to go.
This is my cell phone's fault.
I travel light with a strapped Nike gym bag which I carry in hand most of the time.
Maneuverability.
Held in front of me, it works remarkably like a rudder through the oncoming current of other travelers in the airports.
With the briefcase, no free hand for the phone.

So I got one of these:


Mine is Urban cammo, aka black.  I've had it long enough that it's dirty now.
The pockets, zippers, compartments are minimal and yet well organized.  My Ipad Mini, laptop, gum wrappers, highly important bidness papers and assorted bar receipts travel quite well in it.  The cell phone pocket on the strap I use to store a 3" maglite flashlight rather than my cell phone.
The only issue I've had is with the outside pocket, which has a a magnetic catch on it.  The magnetic catch works really well.  Putting a USB thumb drive in the pocket, I found, is not a good idea.  It became a tiny little brick after spending a day glommed to the backside of the magnet.

Other than that, two thumbs up.  I carry it every day now.

I did not over imbibe on New Year's Eve. I was in bed, watching Russian Dash  Cam videos by 9:30pm.
Happy New Years's btw.
Earlier today, being on a staycation since Christmas, I had a few* bottles of the hoppy brew.

This evening, the drink of choice is Tito's Wodka with a splash of Ruby Red Grapefruit juice from the fertile valley of Tejas. (that's Texas for those of you born after our war of independence from the sadistic dictator Santa Ana )**


* If you are my tee totalling methodist Aunt, one is too many.  I know, right? You thought only the baptists lied about drinking. More to the point...it was more than "one".

** Not to be confused with Santa Clause.   Why does Santa's name  have a "clause" in it?  So many mysteries. Another blog post I suppose.
I digress.  (which is the actual reason for the footnotes)

There's a reason for our territorial attitude in Texas.  We gave up all of Oklahoma and quite a bit of  Colorado to join the Union.  We are still bigger than France, and certainly less inclined to drop our guns and run.

Ham.*
Black Eyed Peas, for good luck.
Cabbage, for Money.
Corn Bread, because the Belle makes a kick ass corn bread and I LIKES IT.


If you are doing the "Soul Food" or "Southern" version of this, collard greens are an appropriate substitution for cabbage.

Given that Belle comes mostly from Irish dirt farmers and I have a bit of the Irish in me as well, we opted for cabbage.....with bacon...and bacon grease.
mmmmmm b a c o n.

*A friendly note to the radical islamist cells nearby:  there is so much pork in my blood, should you get any on you, you will not be getting your 72 virgins.
Posted by kx59 at 6:24 PM 3 comments:

Email ThisBlogThis!Share to TwitterShare to FacebookShare to Pinterest
Labels: Foodage

The Air in Texas Has The Scent of Freedom!!!

Today in The Lone Star State, Open Carry has become legal for those of us who have a license to conceal carry.

My views on whether or not one SHOULD open carry vary.  Personally I don't believe that it's a good idea, at least not for me but it's really nice to know that now I can carry OUTSIDE the waistband and not have to wear frumpy clothing to conceal my pistol.

I will admit that I have not been carrying very often for the past couple of years.  Mainly because of the clothing issue, but also, even with Lady (Sig P238) in my flash bang holster, it's not very comfortable to carry in the summer time.*

That being said, today I found my belt, and my Quantum holster from Dragon Leatherworks, reversed the clips so that I can carry OWB and strapped my beloved Alexa (Springfield XDm Compact 9mm) to my hip, put on a jacket an off I went to the store.

What is great about open carry is that I didn't have to worry about the wind blowing open my jacket or if I reached for something in the store my gun showing.  So now I will more diligently carry my best girl even in the summer when I can throw on a light button down shirt over my tank top.

All that being said....    on my way out of the store, sure enough a gust of wind blew open my jacket just as I was passing by a guy going into the store.   His eyes grew big as saucers and then he smiled a HUGE freedom loving smile....    I said to him, "The land of the free!"   His response was simply..... "Amen!"

Range day will be on Tuesdays after my piano lessons I think.  I am feeling good today and ready to get back to my old shootygoodness self.


*  Most women know that even wearing a bra in the summer time makes you sweat under the boobage, I found adding a pistol to that does NOT help.  Just sayin.