Who does he think he is anyway?

Our President, gotta love the guy, must think that he's the King or more dangerously, the Dictator in Chief.

I realize that his oath of office says that he will uphold and defend the US Constitution, but what he failed to understand is that oath does not give him the power to determine which laws fall under the unconstitutional category.  That power lies with the judicial branch.

So King Obama has decided that he will not enforce DOMA.  While I agree with him wholeheartedly that the law is stupid, not to mention unconstitutional on many levels.  The fact of the matter is, it's still the law, signed in by Clinton by the way, and has not been challenged in a court of law so it has not been found unconstitutional and therefore, must be enforced.

Where is the media on this issue?  Once again, I hear the crickets chirping.  What do you think would happen if a Republican President, in the future refuses to enforce Obama Care?  Or if Bush had refused to enforce the Clean Air Act?  Yeah that would go over like a lead balloon.

This kind of power grab is dangerous by any president.

Posted by Southern Belle at 9:49 AM 2 comments:

It's been a long week and I've been unable to post this week.  Today, I am going to just post links.

This one is a real gem http://www.moonbattery.com/archives/2011/02/good-thing-this.html gotta love that freedom and descent that Hillary was always yelling that it was a patriotic duty to dissent.

TBG apparently enjoys a little sport over at his place http://l2uj.blogspot.com/2011/02/canadian-oddities-curling.html  I love two watch curling.  It kind of reminds me of darts!

Midwest chick gave me something to think about with this gem http://nonoriginalrants.blogspot.com/2011/02/come-and-see-bias-inherent-in.html

And of course a daily dose of curmudgeonly wit is good for the soul.  http://adaptivecurmudgeon.wordpress.com/2011/02/18/paging-al-gore/

Posted by Southern Belle at 8:23 AM No comments:

Some People are Just Assholes

Last night I was playing in a dart tournament (took 3rd place) and this guy that I've known for over a decade was as the line shooting his darts.

His opponent, a young jackass, started whining that my friend had the edge of his shoe over the line.  Then the jackass kept standing beside my buddy while he was shooting just to try and distract him.

Needless to say, this causes some degree of drama and in turn, young jackass thought that he was going to smart off and bow up to me.  Yes me.

Now, there are a few things wrong with this picture.

1.  Most everyone who plays these tournaments knows me, and has known me for a very long time.
2.  I have earned the respect of these people and have a reputation of being fun, happy and most of all a good   sport and 'classy'.
3.  Don't bow up to someone who knows everyone and is respected by these folks because, well you're going to get your ass kicked if you aren't careful.
4.  Last, but not least, if the above three reasons do not apply.  NEVER fuck with someone who is not afraid to defend herself and who would most likely hand you your ass (this guy was, in a nutshell, a pussy).

Yes I am tooting my own horn a little here, but hey, sometimes I deserve it.

What it all boiled down to was that this idiot didn't have skill to beat my buddy so he had to try to distract him instead.  Funny thing, my friend whipped his ass on the dart board and put the guy out of the tournament.

Showdown at the Doggie Door

Well, Romeo has really gone too far this time.

Lately, he's taken to trying to woo Miss Kitty in the backyard.  I guess Romeo decided that boxing through the window in the front yard was no longer satisfying so instead, he prefers getting up close and personal.

Well, Miss Kitty isn't having anything like that.  Today, she was outside sunning herself on the back porch and Romeo shows up and ruins her kitty girl-time at the day spa.  Miss Kitty runs through the doggie door and Romeo tries to follow her inside.

Romeo was trying to come in the door, Miss Kitty was batting him away, it was beautiful.  Nothing like a lovely female defending her home!

Poor Miss Kitty.  Her refuge is no longer safe.
Posted by Southern Belle at 10:24 AM No comments:

Today, on my way home for lunch (yes, I'm one of those lucky folks that has about a 10 minute commute to the office), I was driving through the neighborhood and spotted the coolest bird I've ever seen!  So, I took a photo on my camera phone, which the hubby edited and I post here.

I'm not sure what it is, but we are thinking it resembles a caracara.  Does anyone else know what this bird is?  He was really a big bird and so pretty! 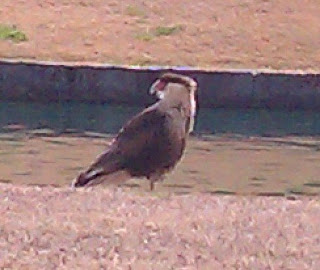 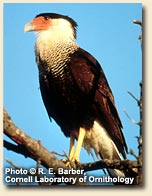 It was really amazing to see one in  my neighborhood!  With a little luck, maybe he'll stick around.

Posted by Southern Belle at 9:15 PM No comments:


Naturally, this was NOT a commercial for the hearing impaired.  The Cowboy didn't SIGN Tiny Dancer but he did SING it.  Though admittedly, signing it would have been funnier.


Thanks darling husband for pointing out my dyslexic moment.
Posted by Southern Belle at 5:17 PM No comments:

More on the Superbowl..

Okay, so I was lazy yesterday and didn't post any more on the Superbowl.

The Big Guy was kind enough to post a comment about his take on the Star Spangled Banner and I have to say that he hit the nail on the head!  Thanks TBG!

More on the Star Spangled Banner.....

First off, I can forgive Christina Aguilara getting mixed up with the verses because if you think about it, though she's a professional, the Superbowl is the largest audience that the girl will ever sing in front of again.  It's a huge moment in one's career, so I can imagine that she might have been a little nervous.  I stand by my earlier post about singing all the extra notes though.

Instead of complaining about it, I'm going to offer a suggestion in hopes that someone that works for the NFL or knows someone who works for them might come across this, but I have an idea that would be excellent PR for the NFL, not to mention it would be a good way for Football to give back to the community that pays their bills.

What about, for the Star Spangled banner you take the local (to where the Superbowl is being held, this year it would have been Texas) State High School Choir and/or State High School Band to do the National Anthem before the game?  I mean it would guarantee to please everyone as the song would be sung/played the way that it was written AND it would save the NFL some big bucks as all they would have to pay for is the airfare, hotel, food and a nice donation to the State Choir/Band association, AND a lot of kids would get to see the Superbowl for free!

I think that America would be touched to see high school students singing and/or playing the Star Spangled Banner rather than risking some idiot pop star screwing it up!

Okay, enough about that....   the game was a decent game, was glad that Green Bay won, I can not cheer for Pittsburgh out of principle (thinking of the Oilers/Steelers rivalry of my childhood), the half time show?  Well, I like the Blackeyed Peas okay but honestly?  They sucked the big one.  The lighting effects were cool though and I enjoyed Slash.

The best were, in no particular order....

It was an interesting Superbowl.  I can only hope for better next year.

Posted by Southern Belle at 5:18 PM No comments:

Once again the folks at the NFL choose the wrong singer to sing The Star Spangled Banner.
Christina Agulara slaughtered it with too many ups and downs on the notes. Why can't these singers just sing the song like it should be sung? Why do they all have to add all those crazy notes?
Hubby says that it's to cover up the fact that they can't sing well enough to hold the notes, I think that he's on to something.
Dolly Parton, while adds a little bit of her own flavor to it, sings it like it should be sung. I love Dolly, she's one of my favorite female singers ever. She's lovely, sweet, smart and very talented.
It's just perdy!
Posted by Southern Belle at 5:48 PM 1 comment:

Last night, I played a dart tournament and won first place.  I was really thrilled and I threw decent darts.  It was a good night but I didn't make it home until 2:30 this morning!  Needless to say I'm not good for anything today. I'm really too old for this, but it's soooo much fun.
Posted by Southern Belle at 12:31 PM No comments:

Say it isn't so!  I woke up this morning is was a whopping 19 degrees outside with a wind chill of 7.  Global warming strikes again...  oh wait, now they call it climate change.

We are having rolling blackouts and so work in rather un-productive today, but fun.  Unfortunately, I have to go and throw pointy things tonight, joy joy!

On the bright side, they're predicting snow tomorrow night and Friday morning....   look for gridlock traffic and wrecks.
Posted by Southern Belle at 12:15 PM No comments: