I never thought I would be traumatized by dinner.... until tonight.

I am visiting a friend of mine in New Haven, CT and deep in the heart of their 'Little Italy' is a very nice, little restaurant.  Appetizers were great,  Atmosphere fantastic, nice wine...

The waiter, was pretty much fresh off the boat from Italy.  His English was pretty good but very accented and when explaining the off menu specials of the evening the lobster with pasta and a spicy tomato sauce sounded fantastic and while we were deciding my friend (who is full blooded Italian) explained to me what it was.  So that's what I ordered.

Apparently, even my friend who grew up in New Haven's "Little Italy" had no idea of the horror that awaited me.

The waiter brings out a bowl, spoon, small fork and cracker to crack claws.  I looked at the waiter and asked if I was going to be served a whole lobster with pasta on the side or something.. he gave me the quizzical dog look and walked away.   My friend thought that maybe it was just the claws or something... so not to worry all is going to be fine. 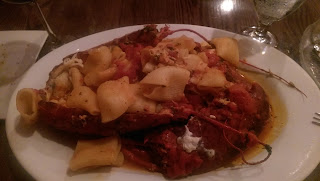 Okay I wasn't expecting this at all!  so i pick through it a bit and see the green guts or whatever it is that is inside the lobster (my friend called it the tomalley pronounced tomale) and I thought I would hurl (had to be because it was green and apparently it's just fat not guts.. but it's.... green).   I did eat some of the meat but really it was just too freaky for me to stomach.

The Antenna are what killed my appetite. Even my friend was taken back by it and was pretty grossed out and considering some of the stuff she grew up seeing cooked.... that's saying something.

So the waiter asked if everything was okay....  I told him that I wasn't expecting that and it was  a bit troublesome for me to eat...    he said in his heavy Italian accent.... "If I had said 'lobster meat with sauce" the lobster would have been in the sauce..."  (I guess since he said lobster with pasta and sauce he meant the pasta and sauce is in the lobster.)

I find this troubling because some day I will go to Italy.....    oye....   I better start learning some Italian.

If I get through the night without nightmares of lobsters chasing after me or jumping off my plate to sing the blues to me.... I will be amazed.

This has been a blogpost from Belle, live from New Haven CT.

Tomorrow I will be going to New York City for the first time....    I can't wait!!   Hoping to see my nephew tomorrow who lives in Brooklyn.