Mid last week I was informed we'd "won" a project and the client wanted me on site Monday to survey a building we'd be tearing down.

DC is a really great city*.

I've been there before.

In my college days as an aspiring architect I toured the cat walks in a Smithsonian Museum dome.  You lesser plebes have only seen this from the floor. I have actually been in between the inner and exterior domes of the building stumbling up and down turn of the last century metal stairs and planks. Weeee! 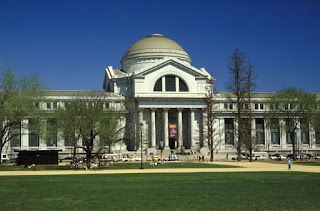 Of particular interest, the acoustics in this interstitial space between the domes produce quite an exquisite echo, particularly when an unnamed 20 year old retard yells out lyrics such as "whip it good" by DEVO. **

The unfortunate thing about this trip was I had the foreboding feeling that I was headed into enemy territory.  I have never felt this way about any city in which I've had a project.  Difference of political opinion?  Sure.
Religion and politics are two things I don't discuss with strangers.  Oh, also Global Worming Climate Change.  Wait, sorry, that was redundant.

On the way out, headed to Reagan to catch a plane, I caught a glimpse of the Washington Monument.  The "repair job" after the earthquake may have made it structurally sound, but it does not look good at all.  I wish I had a pic to share.  It is an image in stone of the state of this country.


*  Over Saturday, and Sunday when I arrived, there were ten shootings, four of which reached ambient air temperature.  Aside from that it is an awesome city to visit because #History! No srsly.

**  I have never claimed to have not been moronic in my teens and twenties. It did however elicit a heartfelt laugh from my fellow morons.
Posted by kx59 at 9:27 PM