Grandpa was a Carpenter Part 3

Grandpa built the house my Dad grew up in. He was working as a Carpenter at the time. I'm not sure if he was self employed at that point though. He worked on it after hours and weekends. Grandpa told me that by the time he finished it, it was paid for. Cost him $1200. That should give you some idea of how long ago that was.
As he told it, he "remodeled" my Great Grandmothers house.  Added a second story to it...sort of. The house was wood frame, pier and beam construction. I guess he wasn't too keen on having to frame a new roof. I surmise this because he didn't rip off the roof and frame up.  Grandpa used God knows how many old time manual house jacks and raised the whole house by eight or nine feet, single handed.  I can imagine him scurrying around under that house like a pinball, from one jack to the next slowly but surely inching it higher.  Once he got it where he wanted it, he built the first floor anew.
So I've been digging around in the big 'ol wooden toolbox and selected a couple of things to share.
One of which I thought was a black box when I looked in over at Dad's house. When I pulled it out this evening, I discovered it's black leather and has something embossed on on the top. It's full of rusty and unusually shaped wrenches.
The pic sucks. I did as best I could with the lighting I had.

On the top part of the emblem "Indian Motorcycle" is written.  The writing around the bottom part I can't quite make out.  I'm guessing this is a toolkit from an Indian Motorcycle.  What Grandpa was doing with it I have no idea. I'll have to ask Dad on that one.
I have a pic of another non-carpenter tool I pulled out of the box this evening.  This one I offer up as a Whatzit.
I may have to preemptively disqualify Pissed, cuz he'll probably know what it is in a heartbeat.
What is it? 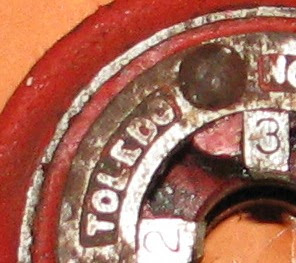 The lovely Southern Belle is disqualified as well, because I already told her what it is.
Posted by kx59 at 7:33 PM

Email ThisBlogThis!Share to TwitterShare to FacebookShare to Pinterest
Labels: Family, stuff that matters