You are Bad Company on stage and people are waving canes instead of cigarette lighters in the audience!!! 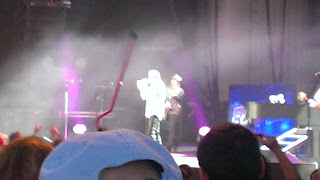 Yes that IS Bad Company with Paul Rogers on the stage.... and YES that is a cane being waved from someone in the front row.

Last night, I took Bootsie to her first rock concert and she was thrilled to be there.  She's a huge Bad Company and Lynyrd Skynyrd fan.  Bad Company really rocked the house, it was great!  I'm not a huge Skynyrd fan but they did well also.

Bootsie was the one that pointed out the cane waving to me and we both got quite a laugh out of that.  It was a great night though it was really hot and the venue is outdoors.  We had excellent seats and Bootsie learned that even us 'old folks' know how to rock n roll!!

So a thank you to my beautiful daughter for asking me to take her to the concert.  It was a great mother/daughter outing that I will cherish forever!