Rain.
We've had an inch or two today. Well we'll see what the total is tomorrow. It's still raining. :)
This kind of rain totally freaks people in Phoenix out.  I've been delayed on flights out of Phoenix because of what we refer to as "Seattle rain" where it just pisses on you slowly. I mean really. If you notice, the rain is actually falling straight down, as in 90 degrees, also known as normal to a plane, to the ground.
OMG! it's a MONSOON!*
Srsly dude?
Down here, the reaction is, "Finally!"
We are way behind on August ball busting thunderstorms.** 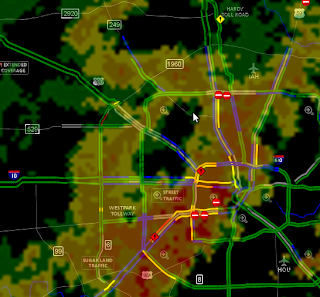 Let's see.
The traffic map shows a bunch of construction zones and..
Oh! Look! anywhere from two to four morons managed to have an accident at 10:08 pm long after the "rush" hour traffic is gone.
-little red diamonds on the map.


I think I'm going to grab another brew from the fridge and go out on the front porch
and just watch it rain.

* I personally witnessed this conversation on a connection out of Phoenix.
** Yes, I"m aware it's September. I'm getting older, but I'm not that far gone.
Posted by kx59 at 10:19 PM

Email ThisBlogThis!Share to TwitterShare to FacebookShare to Pinterest
Labels: A Sense of Peace, Random