Global Warming is just not Cooperating

I have a garagenering experiment all lined up for tomorrow for which I wanted the high temp to hit 100 degrees, minimum.  This is not too much to ask down here in SE Texas in August. It is a frequent occurrence   The chances of rain were kind enough to take the weekend off, but the heat decided to go with it. 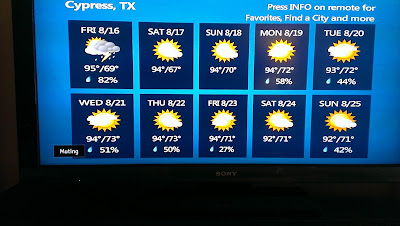 Not one day above 100 degrees and note the overnight lows.  WTF?
Oh don't give me that crap about how it's now called "Climate Change" and the "climate", aka weather, is now experiencing "extremes" just because you re-labeled your failed narrative.
There's only one thing based on more useful lies than fishing - economics.*
There's only one thing based on more variables and fewer constants than Golf - meteorology.*

Looks like it's time to get out the old books about the impending ice age and dust them off.  Eventually one of those crackpots might be right.


* In only two of the four undertakings can you be wrong 90% of the time and remain employed.
Choose two:
A. Fishing
B. Economics
C. Golf
D. Meteorology
E. All of the above.
F. None of the above.
G. Tests give me panic attacks.