So, after we put ailing cat 2.0* down, Belle and I talked about perhaps getting a Siamese or a Russian Blue around Christmas time. I was rather enjoying the discussions about the merits of one breed over the other and the anticipation of getting a new cat.

A few days ago, our oldest daughter texted a pic from work. An abandoned kitten had been found in the parking lot.  She asked Belle if we wanted it. Belle showed me the pic, and after long deliberation that lasted about 2 miliseconds I said, "OK".

He's only 4 to 5 weeks old, 12 oz. of skin and bone under that frowsy fur, but at the rate he's eating that won't be for too long.  He made his first visit to the Vet today for a checkup. Vet says he's healthy

Belle and I are working on a name for him.  She keeps coming up with names from Harry Potter. bleh.
I like "Lord Tennyson", LT for short. (I've no idea where that came from) 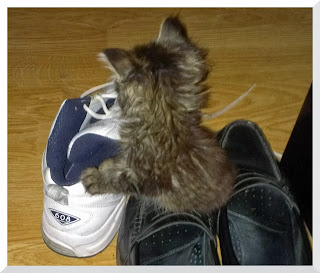 * In order of acquisition:
Cat 1.0, Jasper - came as part of the package deal when I married Belle and her two daughters. Shredded my fake leather couch. We eventually came to terms.  Deceased.
Cat 2.0 Miss Kitty - Socially retarded. I blame our children. Recently deceased.
Cat 3.0 Ballou - Neighbor's cat that adopted us. Passed from complications associated with feline aids.  I really liked that cat.

Email ThisBlogThis!Share to TwitterShare to FacebookShare to Pinterest
Labels: Family