Leaving the light on for friends

For more than a decade, we have had little friends living behind our house number sign.  They're little geckos and I have basically adopted them.

One year, there was one gecko that I spotted in the flower pot, his back was broken and a spider was on top of him trying to make a meal out of him.  I did away with the spider, then set a large stick in the pot so that the gecko could make his way out.

His back legs were paralyzed but he made it out of there.  He lost his tail so I called him Stubby.  Stubby healed up just fine and eventually got the use of his back legs again.  He also, of course, grew another tail and lived on to make many babies, some that survived, some that didn't but nonetheless, Stubby's family is alive and thriving to this day.  If you sit very quietly, sometimes you can hear them make their cute little noises.

I was beginning to worry about my little buddies because I haven't seen them appear, until last night, that is.   If you click to enlarge the photo, you can see him behind the top portion of the sign peeking out.  I don't think he cared for the flash of my camera, but oh well. 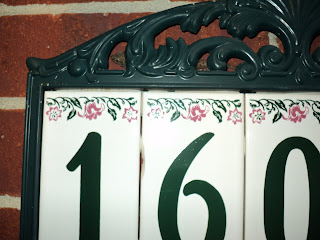 You see, I always leave the porch light on every night for them.  It's not because they're afraid of the dark, but because the light attracts bugs and my friends eat bugs.

It's now June Bug season and my friends will come out in droves to grab up those tasty morsels.  It's funny to watch them .  They sit very still until an unsuspecting bug lands close by and then they attack, so fiercely and swiftly you would think that they were at the top of the food chain.

So what about Stubby?  I'm not really sure.  His new tail came in and it was a smooth color, not spotted like the rest of him but I think that Stubby has probably died by now, though I do look for him.

At any rate, I love the summer season because I can smile at my little friends and from what I understand, they're also good luck, and well, I could always use a little good luck.

So now, for the rest of the summer, the porch light will stay on all night long and my visitors will be quite content and happy with plenty to eat.  Life is good if you're a gecko at the Belle's house.

Posted by Southern Belle at 9:50 AM

Email ThisBlogThis!Share to TwitterShare to FacebookShare to Pinterest
Labels: Home on the Range, Random