The Sweet Smell of Victory!

Last night, I played a dart tournament and oh what a good time it was.  I drew the top professional player in the Texas Region, and when he goes to Nationals he ranks easily in the top 5.

Donnie and I go way back and in a blind draw tournament, he is the one that you hope to draw.  The beautiful thing about him is that he never gets mad when his partner misses and he always has something nice to say.  He is truly a class act.

At one time, I was the female shooter that everyone hoped to get in a blind draw.  Since I've taken time off from darts, it's hard getting back to the skill level that I used to be, but I'm getting there.

My first game that I threw with Donnie, I did not have the appropriate serum level of aiming fluid and so I was forcing my darts to the board rather than letting them flow.

Once I finished this: 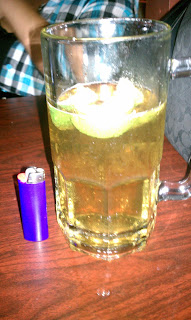 I was much more relaxed.

Now THAT's a beer.  I set the lighter down next to it as a point of reference on how big this thing is.  It's a Dos Equis draft and in the glass is about 4 limes.  Mike's Ultimate  has the coldest draft beer in the neighborhood and unlike Miller Lite or Bud on draft, Dos Equis doesn't give me a hangover.

You gotta love living in a place where you can order up a Big Ass Beer and they give you just that!

So, like I said, once I finished that beer, I was much more relaxed and I began to throw much better.  It was a great night and I took first place and won a little money.  I just love darts and dart players.

Here are a couple of photos from way back that I took of my darts that when I walked up to the board to pull them and I saw what had happened, I was dumbfounded and had to get a picture of it.  It's a couple of those times where you just scratch your head and say, "How did THAT happen?" 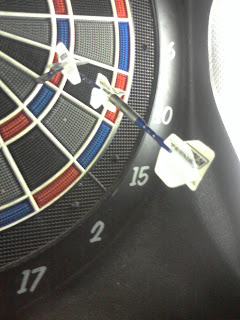 This first one is a classic Robin Hood shot.  The funny thing about this is that the dart stuck inside the flight of the previous dart thrown.  Even funnier still was that that Robin Hood shot won the 501 game. 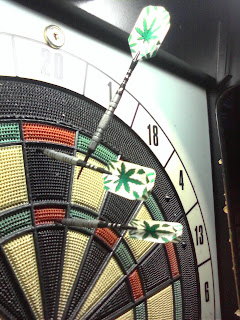 Okay, this shot is a really good one.  In plastic tip darts, on the shaft, there is a little hole that you put a tool into to tighten them down.  I was playing a cricket match and I threw the triple 20 to close the number, then I pointed up on the single and the third dart I missed just above the double (outside ring) and it bounced and the point on my dart went through the hole in shaft and it stuck there.

Yes those are pot leaves on my flights, but my previous flights ripped and that's all the bar where I was playing at had in stock.

Oh darts are so fun.
Posted by Southern Belle at 11:12 AM