Mother and daughter at the range

It was a nice morning with my oldest (but shortest) daughter at the range today.  I was able to fire off a box of ammo in the Tokorev.  For some reason that gun does not like to fire the soft point rounds but rather it likes FMJ and does not jam up at all when firing them.  I started out with the box of FMJ rounds and it was 'shooty goodness' but when I switched to the others, after the first round it immediately jammed up.

I didn't feel like hassling with it today so we packed up Natasha and headed over to the pistol range to shoot my daughter's Springfield XD-9.

It's a nice gun but I do prefer the XDM 9mm and I think that I've pretty much decided that the XDM is the gun that I'm going to get when I'm ready to buy.

I had a bit of an off day today at the range and for some reason I was shooting low and left and I can't figure out why.  I'm sure that I'll work it out eventually, I know for a fact that it's not the arrow, it's the Indian.

So, without further ado, here are a few photos of our trip to the range today.

This is me with the daughter's pistol. 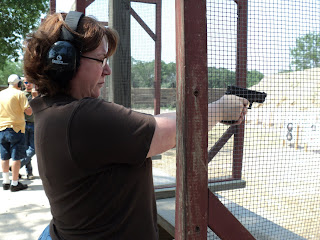 This is my lovely daughter. 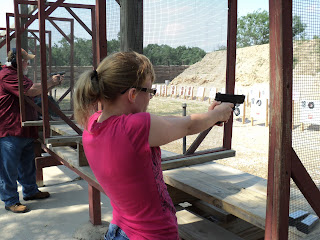 This is me with the Tokorev. 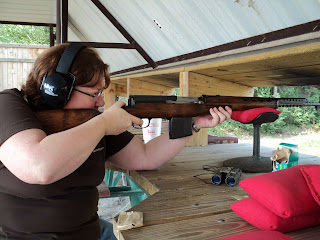 Funny story about today.  We were at the rifle area and I had just fired off the first few rounds in the Tokorev and asked my daughter if she wanted to give it a go.  She said yes and sat down and picked it up.  She couldn't get comfortable with it and really couldn't get it seated properly and when she did have is seated into her shoulder, she couldn't really reach well enough to get a decent shot off.

She did the smart thing though, rather than pulling the trigger anyway, she laid it down and turned it back over to mom.  I think that she was afraid of hurting herself, which is smart, but amusing considering that she's so tiny.

Over all it was a good morning, my daughter enjoyed herself and so did I.  I look forward to the next time we venture out.

I'm still keeping my fingers crossed for a gun for my birthday, but hubby says I have to get a job first, which is probably the wise course of action.  Until then, I'll just have to be happy with shooting the Tokorev.  Of course, admittedly, Natasha is pure heaven.