Me.
An attempt at a few push ups night before last was an eye opener.

I'd already planned to start the process of doing something about this prior to the fatter boy pants post.
I had a "yep, you are right" moment when Maura and ASM826 offered some encouraging comments.
Well, uhm ASM826 any way.  Maura just hit me with a frying pan.

The plan was to begin some introductory exercise while I was off for Holiday between Christmas and New Years.   A cold virus intervened.  Still trying to kill the bugger. 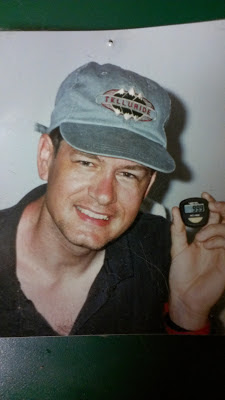 The odometer from my POS Peugot road bike reads 99.9 miles from the first day of my totally awesome adventure** on the MS150 cycling event.  Looking at this pic at the age of 53, I discover that I, at 36, I bore an uncanny resemblance to Forest Gump.  Stupid is as Stupid does. I did finish the event however, and they told a huge fib. It was in fact 163 miles.

I apologize for the digression.
So I've picked up my free weights again.  Starting small, with many repetitions. I've always been a proponent of free weights versus the mechanical Nautilus type machines.  They  work your core while you are focusing on biceps and triceps, or whatever else.

I do actually know how to do this, but I have slacked off in a major way, for way too long.
In two weeks for so, I'll be shadow boxing with 5 lb weights in my hands.


Oh, and a thanks to Maura.

**  My riding partner and I thought the worst hills would be in the second day of the event and we were sorely disabused.  I woke up on the morning of the second day feeling like every fiber  of every muscle in my body had been stretched by a piano tuner.  We started out the second day into a head wind, spending most of our time down on the lower bars.  It took us almost ten hours to go 100 miles the first day.  A ten mile an hour pace.  Into a head wind the second day, we clocked a 35 mile per hour pace.  There is no "down hill" between here and there, so I have no explanation for that.
Except for the backside of the hill in Bastrop State Park where I hit 50 miles per hour on a loose gravel road with a hard left turn at the bottom.

The back brake is your friend, burning rubber smells good in comparison to the smell of road rash.