It's called a laptop computer right? Which indicates to me that it is intended that you would place said computer on your lap.  So, which moron thought it would be a good idea to put the intake ventilation slots on the bottom of the computer? I mean, it's not like the vent holes might get covered or anything.
I've seen high end laptops at work overheat sitting on a desk. Processor says, "My. but it is wahm in heah" and the computer shuts down. Solution was to get an aftermarket vented pad so the 'puter could breath.
(I'm looking at you Sony and your...snort, snarfle..ptooey, vaio laptops)
I know shade tree mechanics that could do a much better job of designing the cooling system. Now that I think about it, they don't have this type of problem with their laptops...probably take a drill to the bottom side of the computer and put a lift kit on the back end to improve air flow.
Belle's wireless connection keeps dropping out on her laptop. It's not a Sony.  The nubs HP substituted for feet provide upwards of 1/16" of clearance off a flat surface.  The bottom side of her 'puter gets pretty warm.
So we've got the back edge propped up this evening doing some empirical testing to see if the wifi loss is heat related.  As for me, I've learned the precise position in which to place my laptop on my lap so that it vents properly. It's a yoga pose similar to standing on one foot, holding the phone over my head and squawking like a chicken, but it does the trick.
Personally I think this is part of the Uber Corporate Conspiracy known as planned obsolescence.
More heat means a shorter life for the ' puter which means you'll go buy a new one sooner.
They don't know me vewy well, do they? You'd be surprised what  you can do with a rubber band, a paper clip and some duct tape.
And, if Belle's wifi drop out problem doesn't abate, we'll just ventilate her computer  by other means. 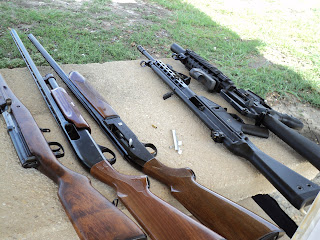 Email ThisBlogThis!Share to TwitterShare to FacebookShare to Pinterest
Labels: myeffingcomputer