Letter from the Alamo 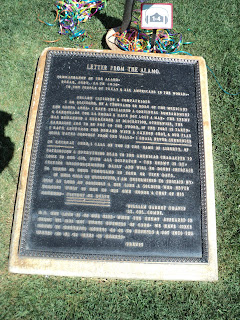 Travis' letter is memorialized in front of the Alamo. Knowing how the 12 day siege turns out, and having the benefit of historical hindsight, I find myself humbled by Colonel Travis' courage. I could go on and on about how this same story occurred before, and after the siege at the Alamo. History has a very nasty way of repeating itself. As I read the plaque though, I felt a certain connection between Colonel Travis' circumstances and our own as a Nation. We are surrounded from within. We have no choice but to stand our ground. This time however, it's not 188 against 1800. The odds tilt the opposite direction. Stand your ground.
Colonel Travis wrote:

To The People of Texas and All Americans In The World --
February 24, 1836
Fellow citizens & compatriots --
I am beseiged, by a thousand or more of the Mexicans under Santa Anna -- I have sustained a continual Bombardment & cannonade for 24 hours & have not lost a man -- The enemy has demanded a surrender at discretion, otherwise, the garrison are to be put to the sword, if the fort is taken -- I have answered the demand with a cannon shot, & our flag still waves proudly from the walls -- I shall never surrender or retreat. Then, I call on you in the name of Liberty, of patriotism, & every thing dear to the American character, to come to our aid, with all dispatch -- The enemy is receiving reinforcements daily & will no doubt increase to three or four thousand in four or five days. If this call is neglected, I am determined to sustain myself as long as possible & die like a soldier who never forgets what is due to his own honor & that of his country --
VICTORY OR DEATH
William Barret Travis
Lt. Col. Comdt.
P.S. The Lord is on our side -- When the enemy appeared in sight we had not three bushels of corn -- We have since found in deserted houses 80 or 90 bushels & got into the walls 20 or 30 head of Beeves --
Travis

I've no doubt those men prayed many times during those twelve days. They didn't just delay Santa Ana, they reduced his siege forces by a third.
There are a series of bronze plaques inside the alamo, listing the name of every man that died in its defense. I've been to the Alamo several times from childhood on. This time I read every name. They fought to the last man. Santa Ana technically won, but at great expense. Weeks later at San Jacinto he lost the remainder of his army, in 20 minutes. 700 dead, another 730 or so surrendered. The remainder scattered into the woods.
The Texians lost 9.
Texans and Texians are not the same thing. As Texans, we have a strong connection to our Republic, but the men that fought for Texas independence came from every part of this country.
Find your inner Texian. Stand your ground.
Posted by kx59 at 7:42 PM

Email ThisBlogThis!Share to TwitterShare to FacebookShare to Pinterest
Labels: Liberty