First thing:  The first draft of this post was ridiculously long. I attempted to capture every experience from the event.  Way too long. The first draft looked like a manuscript for a book.
Second thing: There were so many participants, I did not meet everyone there, so please leave a high five in the comments.
Third thing: If I missed blogrolling you, please give a heads up in the comments.
I mean really, let's get to the fun stuff.  The pics.  And, grab any you like from the post
The Sooper Secret Shooting Spot. (yes, this is actually Texas. Not every part of the state looks like a John Wayne movie.) 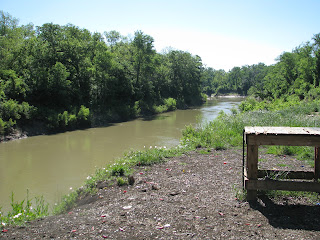 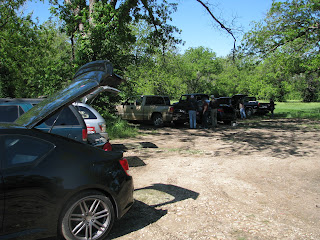 The Scion rollerskate made it down the dirt road hill from hell - only scraped the front air dam once. (well, ok, twice, on the way out too.)

There were guns:  (So many to shoot, so little time)
That's Pat's spread to the left, sharing Bob's table I believe.  Pat came for some recoil therapy - two weeks away from graduating from graduate school. I didn't ask, but I suspect it wasn't a degree in dead languages or women's studies.  I regret not shooting more of his pistols. I did shoot the .22LR with the supressor that made less noise than me spitting though. I'm trying to find the words to describe that...heh!, ...K, that'll do. 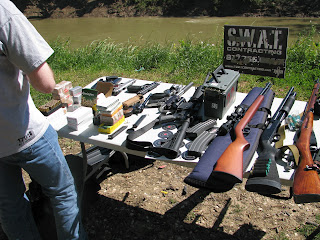 Lots and lots of guns. 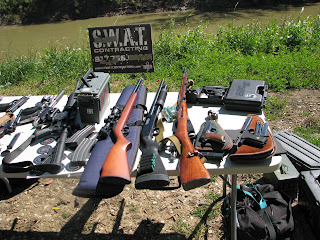 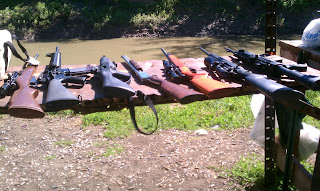 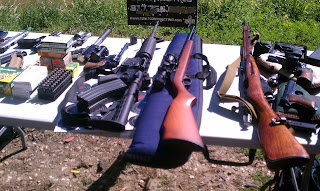 There were two stars of the show: The first deployed was Redneck Engineer's custom built .50 cal. That's the Engineer in the foreground and "Zuit Suit David" in the background.  The .50 cal. EBR off to the right, of course. 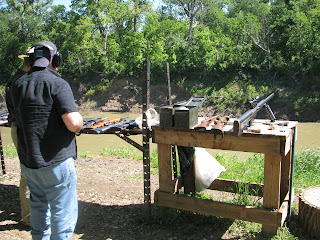 I had a choice to make. Shoot pics or shoot guns, so I didn't catch them all. There were at least three more benches like this.

"Zuit Suit David" has a frame not unlike an AR, nest ce pas? (I miss being that young..and thin)
Make no mistake, the Zuit can Shoot. 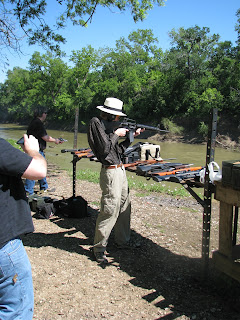 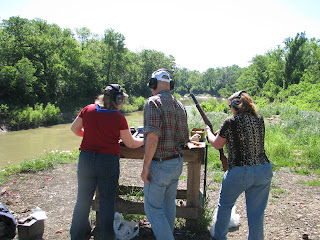 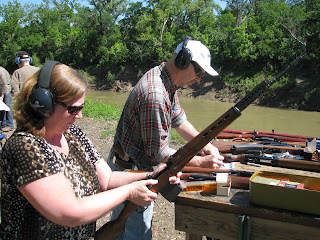 "Nick the Bloggless", the Mighty Kevin and Borepatch converse about the meaning of life guns. 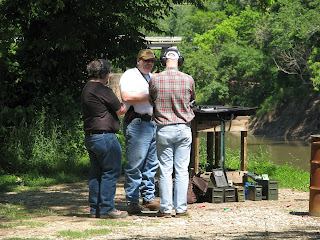 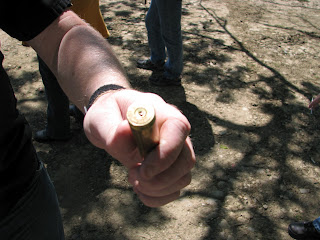 Zuit shoots the .50 cal.  I never did shoot that beast, but every time it went off it made me effing smile. I mean, just feeling the shockwave from the muzzle blast felt like FREEDOM. 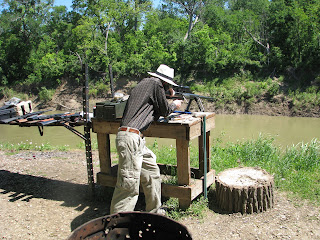 The .50 experienced a technical failure, well two actually.  Go figure, The Redneck Engineer replaced the  broken bolt handle with a bolt he scrounged out of the bed of his pickup. How he managed to fix a sheared off allen head screw in the field, I have no idea, but he got it back up and running.
The Engineer  is on the job: 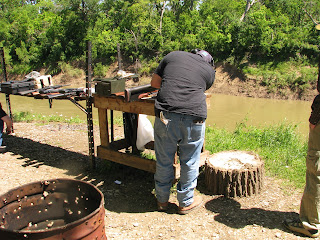 The Meadow and the Unicorn of hope and change.
Rabbit ques up his Sig P229 .357, Nick does egregious damage to the unicorn,  Zuit looks on. (is it my turn yet?) 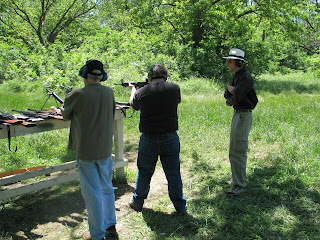 That was a later pic. The unicorn of hope and change had no hope, but it definitely changed as the day progressed.  The pic below is roughly from mid-event. Pink fluffy target at roughly 50 yards.
A big thank you to Borepatch for wrestling the unicorn from his canine's massive jaws to provide the target. (although, Bart jumped better) 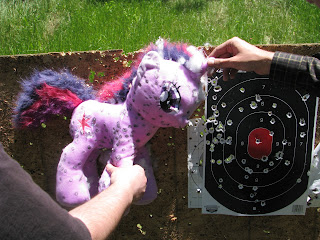 That is not the lesser leopard spotted unicorn, in spite of what the animal channel might have you believe.  The gray spots are in fact entry wounds. The exits come later. (you really should click to embiggen on this one) 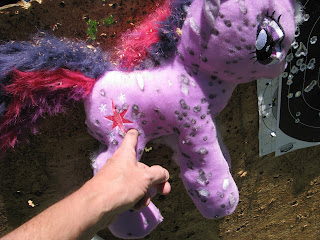 Belle shoots Nick's AR, Nick peeks in from the left of the frame: 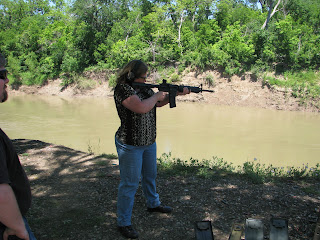 Belle was really bummed when the .50 cal went down.  Later after the Redneck Engineer did his field magic, Belle gets some preparatory instruction on shooting the bad boy. ( he'd be the guy to have in your fox hole, just say'in) 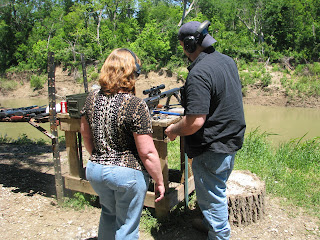 Belle prepares to pull the trigger. I missed the "want one" grin afterwards. 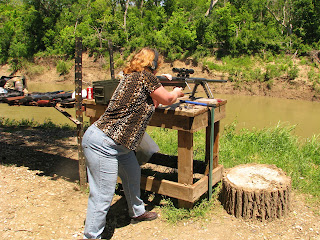 Borepatch off-hands Rabbit's FAL, He's good with his Enfield, but I think he might have found his shooty sole mate. That was a pretty tight group at 200 yards with iron sights. Tango down. 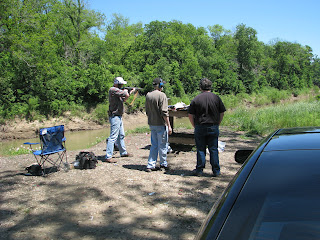 The other star of the day. It's not every day you get to see a hand cranked machine gun. I'll need someone to comment on specifics as I didn't get them, but...Hell Yeah! 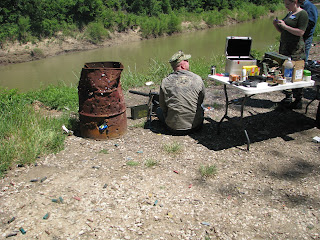 A little camera alchemy. Nostalgic, I am. 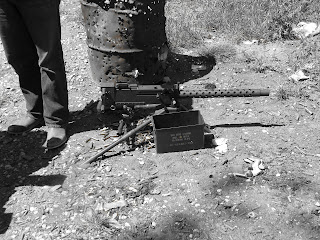 That is not a googlesnitched pic. I took that myself.

The Grand Finale. The Bayonet charge on the unicorn enemy held position. In slow motion. (we're getting older after all, and there's grass, and uneven ground, and we're running with sharp pointy things. Mom always said, "don't run with scissors in your hand!")
Inspite of all that, the enemy was vanquished. 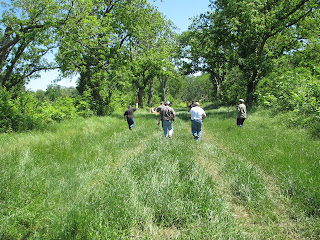 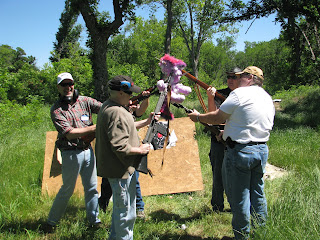 On a more personal note:
The first rifle I shot was Kevin's M1 Garand. I'd never shot one before. It was beautiful. Kevin handed it to me, and I held it in my hands and just admired it. Kevin asked me if I'd ever shot one before, "no", says I. Kevin loaded it for me and gave a few brief instructions. Then, I shot it. I held a piece of American History in my hands.

As the day wore down and we were getting our adolescent jollies abusing the hope 'n change unicorn, at the final firing squad, this caught my eye and I caught it with my camera: 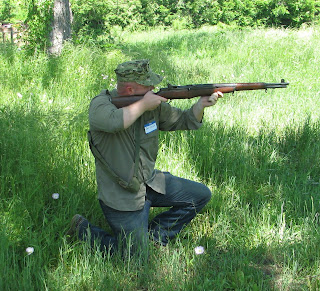 I am not a Marine, but what the hell. Semper Fi Americans!


Oh! The hopenchange unicorn you ask?
Well, it had no hope and changed a lot over the course of the day.
This was after Nick the Blogless, Borepatch and I abused it with Nick's Evil Black 12 gage. (aka his bad idea gun) 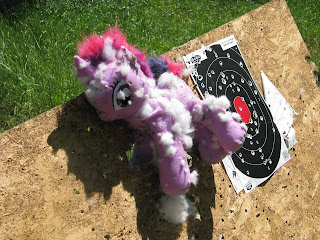 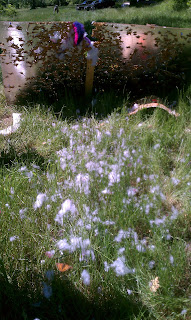 Yes, that is what unicorn blood looks like. It will not power your washing machine, or run your car.