From here, you can see Mexico 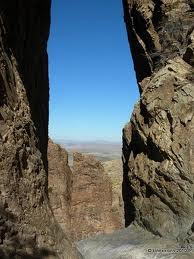 This is "The Window" in Big Bend State Park. It is said, that on a clear day, you can see 200 miles into Mexico.  Been there. A very memorable trip, but that's a whole nuther post, as they say. 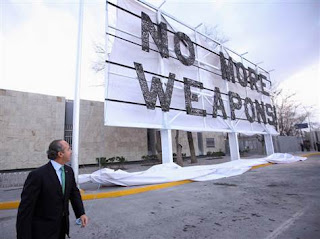 This is the sign, purportedly made from weapons illegally exported to Mexico from the U.S. (courtesy of the ATFB, FBI and DEA btw)

The lie your Federal Government via the main stream media told you?
"The Mexican Government knew nothing of operation fast and furious".
I don't think the Mexican peasants of Mestizo decent along the border put this sign together.
Not much you can count on these days, but at least the Mexican government is keeping their part of the bargain in Obummer and Holders's little gun grab.

Pissed had a post that made me go..hey, wait a second.  "Automatic" weapons? From the U.S.?
I could blather on, but I'll just close with the comment I left at The Feral Irishman.


Supposedly, the Mexican government knew nothing about the fast and furious operation. Holder et.al. are still trying to salvage the underlying goal of the operation, which was another "assault weapons" ban. This sign puts the lie to the Mexican government's ignorance of the operation.
As a Cartel gun buyer, why would you buy semi-auto weapons from the U.S., when you can get the full auto versions dropped by boat anywhere along the thousands of miles of Mexican coastline from the myriad of shithole countries on this planet?
This is Holder's Hail Mary pass.

Email ThisBlogThis!Share to TwitterShare to FacebookShare to Pinterest
Labels: my aluminium foil hat, The Border