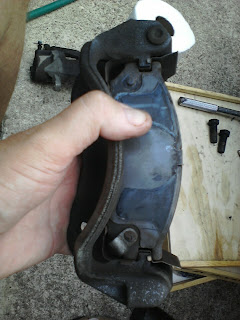 This is what I got to do today instead of heading up to Austin for a blogmeet and a gunshow.
Fortunately, things went well today. Copious amounts of swearing and Rum were not required.
One thing I have learned is when dealing with mostly symmetrical assemblies is to take pics before dis-assembly.
When it was time to put the brake pads back in, this and other pics came in handy.
We replaced rotors and calipers. The brake pads looked new and almost unworn. Unusual. I knew the rotors were warped from the rhythmically lurching stops.  The brake line bleeding process produced an enormous amount of air out of the passenger side line. Hence the spongy brakes. 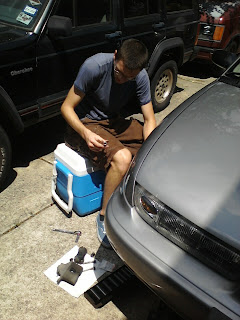 Notice the shade line on the hood in the lower right corner of the pic. The Prodigal Son was working on the passenger side while I was on the driver's side...in the shade.  Around 11am, we headed to the auto parts store with dead brake parts in hand to trade in.  The Bellemobile thermometer indicated it was already 100 degrees outside.
I am so tired of writing about 100+ degree days. Mostly because I keep having to go outside in them.
I see so much of myself in my son. The heat brought on fatigue which brought on his impatience and then some frustration, which lead to the only swear words of the day.
I've been there. I've flung wrenches across the garage. I've learned not to do this anymore because it makes them really hard to find later.
We took several breaks to go inside and cool off. Belle decided she needed a power nap, so we fired up the xbox and killed bad guys while we cooled down. 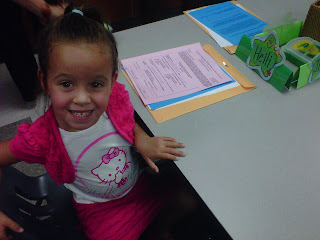 My oldest granddaughter is visiting today and spending the night. She wanted to play too. This mostly involved her uncle and I leaping into her line of fire so she could "kill" us.  She had fun.  The prodigal son and I amused ourselves by jumping around and spinning in the game to see which could achieve the most ridiculous "death".
She shot up a bunch of air and dirt playing the game. When she ran out of the million rounds she had, she switched to the locket rauncher and asked "what's this?"  I said, "pull the trigger and find out"
A few more years and Belle and I will have her on the firing line with the Ithica .22.  I know, I'm a terrible, terrible paw paw.

She's starting big girl school and she's very excited about it.
As for me,  I was relieved that the manchild came over to help prep his youngest sister's new ride.