There's a joke in there somewhere...

But I'm too sun baked and salt cured to bring the correct snark synapses into play just now.
From the Men's room last night at Stingray's: 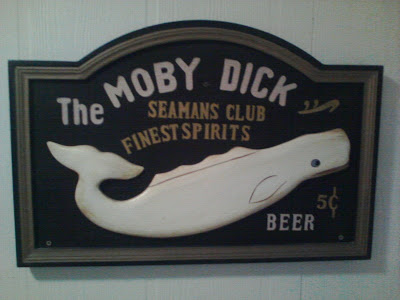 So, I'll just leave that there as a teaser for our blogbud North to leave an appropriately blue innuendo.
We're on the water again with the youngest girl child and one of her school friends.
Stingray's sits on the inter-coastal water way at Sargent, TX. It's not Key West, but there's still something calming about having dinner on the deck outside at dusk watching the barges go by.
Fishing today didn't produce much, but we started late, so that's our bad. The fish are out there. We ran across a guy at Charlie's bait camp, that had been wade fishing the bay side of the barrier island at sunrise in East Matagorda. He limited out on Specs and caught a Red fish that just made me drool.
We met Charlie today.  I'd always thought it was the old grizzled guy that runs the shrimp boat. Turns out, it is his 4 year old granddaughter that's named "Charlie". She'd been on deck lending a hand since 5am this morning and she was still going strong when we drifted up for bait.
The water down here right now is as clean as it ever gets. It was worth the trip just to be able to see the bottom while floating in 24" of water.
What we refer to as "needle fish" were thick, and very hungry where we were fishing. We hooked up several of them, which is unusual given the bony snout. They must be really hungry. They were chasing bare hooks and bobbers on retrieval.
This was the only fish Bootsie caught today. (Needlefish) 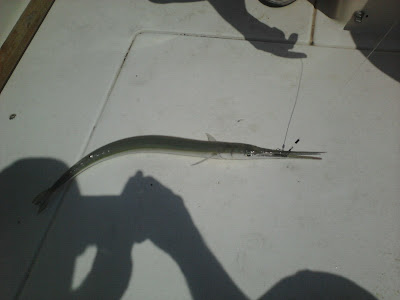 Both the needle fish's lower and upper jaw articulate, and they are pissed off snappy little bastards when you are trying to remove the hook.
I caught one Spec an inch over minimum limit.  No pic since it wasn't that unusual. So the plan is to hit the bay at sunrise tomorrow.
Posted by kx59 at 4:49 PM

Email ThisBlogThis!Share to TwitterShare to FacebookShare to Pinterest
Labels: A Sense of Peace