I've been fascinated with all things ancient ever since I was a little girl.

I have an uncle (my dad's brother) who is a very gifted yet eccentric man.  He worked at NASA during the space race and then moved on to work for the Department of Defense doing super-secret defense stuff that he can't talk about.  He's an electrical engineer.

When I was growing up, I was always fascinated with my uncle not only because of his scientific mega-mind (how many kids could say to their friends, "My uncle designs stuff that goes to the moon") but because he is full of very interesting facts and knowledge about the ancient world, in particular, Ancient Egypt.

For a time, he worked and lived in Jetta, Saudi Arabia and while he was over there, he got the opportunity to see Egypt.  (this was before the terror threats that we have today, the region was much more stable back then)  He has a treasure trove of slides that he took while in that part of the world and when I would go and visit him and my grandmother over the summers, we would look at slides for what seems like hours.

With each click of the slide projector and with each image on the large screen, there was a story to be told.  He would explain what each image was, what it meant and/or what it was used for.  I was always fascinated.  To this day, if there is something on TV about Ancient Egypt, I will always watch.

My uncle had a book about King Tut and the discovery of his tomb witten by Howard Carter himself.  Howard Carter is the man who discovered Tutankamen's tomb.  Granted, Carter originally wrote the book in three volumes; however, this was a modern (at the time) compilation of all three volumes but Carter is listed as the author and nothing was changed.

I loved to read that book and look at the photos in it and my uncle, bought a copy of the same book for me as a gift.  Funny thing about that book.  At the time of Tut's discovery, they didn't know who his parents were but thought that he was probably the son in law of Akhenaten, the heretic King who had changed his name from Amenhotep IV.  Carter states in his book that for all they know Tut could have been a common boy who married a Princess.  (We now know, through DNA testing of the two mummies, that Tut was the son of Akhenaten)

So fast forward to this past Sunday when I was able to go and see the King Tut exhibit at the Houston Museum of Fine Arts.  I constantly thought of my uncle as I looked at artifact after artifact and as I moved through the exhibit I recognized several of the items from my book.  At the end of one room, in a case by itself I recogonized one piece in particular which is on the cover of my book. 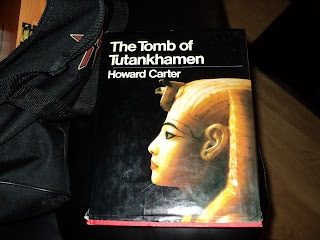 The above is the book that I've had since I was 10, but on the cover is a beautifully detailed alabaster lid to a canopic jar.  A canopic jar is where the organs of a mummy were stored.  Each jar had 4 separate compartments with 4 separate lids and each set of organs were placed in individual coffins and then placed in the canopic jar.  The organs (except for the brain) were kept because they believed that the dead King would need his organs in the afterlife.  The heart remained in the chest, the lungs, liver and kidneys were placed in the tiny coffins and stored in the jar in separate compartments.  The brain was discarded.

The piece in the above photo was exquisite in person.  The detail in the carving and painting was simply amazing.  In a case nearby there on display was one of the tiny coffins for one of the organs.  This was made of solid gold and the detail was just as amazing as the canopic jar lid.

My day was simply wonderful as I moved through that exhibit, not only was I looking into a world of ancient times, but I was pulled directly back to some of the happiest times of my childhood.  I hope that my uncle knows how much his knowledge and his own experiences have shaped my own personal interests.  To be sure, I will send him an email today just to say hello and get him to come and read about my day at the museum.

Something else that my uncle taught me.....    he taught me to write my name in hieroglyphs.  Assuming that I did this correctly at the time, I wrote my name inside my book (just like he did in his copy). 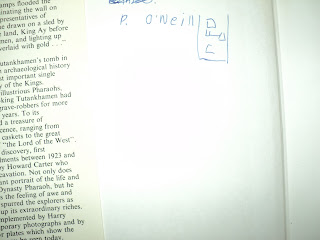 Posted by Southern Belle at 9:45 AM