Caleb over at Ammo For Sale asked me to check out his web site and also asked me to test fire some ammo for him and then blog about it.  I emailed him and explained to him that I am a novice shooter and so my knowledge on ammo and firearms is rather limited.  He didn't mind that at all and sent me a box of Magtech 9mm 115 gr ammo.

I decided that I would test the ammo for cleanliness and accuracy.  First thing I did was give my pistol a very good cleaning.  (Apparently I impress hubby with the speed in which I can field strip, clean and reassemble my gun, which I didn't know he was watching me.)  After cleaning the pistol, I took a box of Remington 9mm 115gr ammo and the box of Magtech with me to the range, along with my cleaning kit.

So first I shot 50 rounds of the Remington ammo. 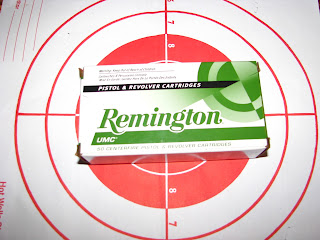 I have to say that this ammo was okay for target practice but it was very dirty.  I took a photo of the outside of my gun near the bore and you can see the black residue on the outside of it after 50 rounds.  Also, you can see at the end of the black area of the gun, the gray look to it...  all of that is powder residue.  As far as accuracy goes, well, for me, it's always the Indian not the Arrow; however, the Remington was accurate enough.  (Typically I shoot Winchester which is also dirty)  I couldn't tell the difference in the two brands as far as 'feel' and accuracy. 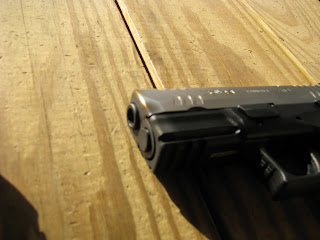 So after I finished off the box of Remmington, I then cleaned the gun again and got her all nice and shiny so that I could test the Magtech. 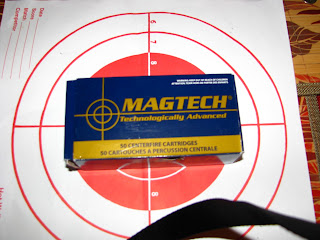 I could tell there was something different about this ammo from the start.  The smell of it was slightly different.  I can't really describe what I was smelling, but it didn't smell dirty.  Granted, this is really from the point of view of a novice.  The ammo itself fires fine and I didn't really notice any difference in accuracy of the rounds.
After firing 50 rounds of the Magtech I placed my pistol on the bench and looked at the muzzle.  The difference in the two was significant.  The end of my gun, while a little dirty, was MUCH cleaner than the Remington. 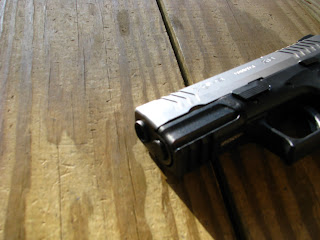 I really liked the Magtech ammo but it tends to be pricey if you buy it at a gun range or at the store.  The gun range where I typically shoot sells it for $17.00 for a box of 50.  That's a lot of cash for ammo.  After browsing around www.ammoforsale.com I noticed that same box was $12.00 and they also sell it in bulk for a very reasonable price.

They have a nice, professional website and Caleb was very easy to deal with.  I know that when I decide to buy ammo by bulk I will certainly give them a look. For 9mm ammo just go to http://www.ammoforsale.com/9mm-ammo-for-sale and shop until you drop!


So that's my little bit of ammo testing.  I guess that sometimes it's even a good thing to get an opinion from a novice.