You wouldn't know by the pics

But, sometimes, I can actually shoot. [Be forewarned, long rambling post due to fatigue (also known as overhang)]
The day started with the King Tut exhibit.  It was a prime imperative, planned some months ago that we would be attending.  The lovely Belle is enamored with anything ancient Egyptian.   She got the prerecorded thingy that gave the history about each of the artifacts, which she would occasionally share with me, and then add a few facts that were left out.  In spite of my profession, I'm more of a European WWII history buff. Scholar by no means, much more a dilettante. I can watch documentaries endlessly as long as it's the Nazis getting their asses handed to them. (I digress, as usual)
Where was I? Oh yes, the King Tut exhibit.  This was just incredible! Do you know that the artifacts look exactly like they do on the History Channel!!?  Standing and walking slowly through a crowd for a few hours just kills my lower back.  This isn't something related to being half a century old. I've had this problem my whole life. Not to mention that we went to a barbecue party yesterday, at which I consumed, perhaps, just perhaps, a few too many hoppy beverages. (ok, I admit it, I was pretty wobbly when we left). So, I was not terribly energetic today.
So the plan, as I was informed this past Friday, or so, was to go to the gun range after the Tut exhibit. I recall no discussion about this whatsoever, but it wouldn't be the first time I've missed the finer details of the BAR social schedule.  So, as I was *Reminded*, the plan was to take the Tokarev and Belle's XDM to the range for some recoil therapy. So, me thinks, "perhaps we should take the plinker saddle gun too!" 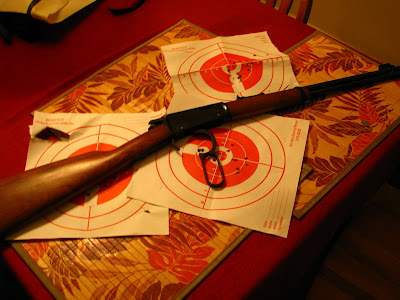 Ithica 22 LR with a heavy duty barrel. I bought this in my late teens, back in the brief moment of history when the gubmint decided that if they could send us off to war to die at the whim of old white men in three piece suits, we could consume alcohol legally and buy firearms at the age of 18. I bought this gun because it looked like the rifles John Wayne used.  Frankly, I had no real use for it whatsoever. It has less than 100 rounds put through it.  So, I was going to put 100 rounds through it today.

Didn't work out that way.  Deer season is nigh upon us. Take a number. Hotwells Shooting range was packed...standing room only. Even the 25 yard range where the Lovely Belle and I embed .762 rounds half way through the berm behind the paper.
So, we punted and headed to the pistol range to shoot her XDM.  I was tired, and not a happy camper.  My "Give a Shit Factor" was off the bottom of the chart and it shows. 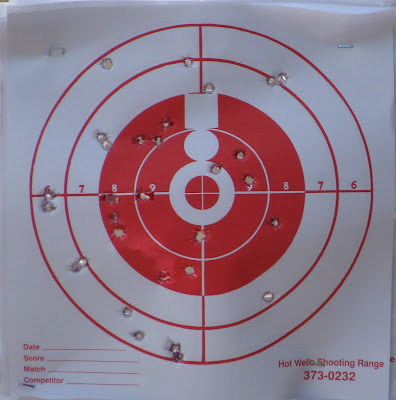 This was after several mags. Shit, "thinks me" I could do that with the 12 gage in two rounds. Hell, at 7 yards, the wad would have blown a hole through it. 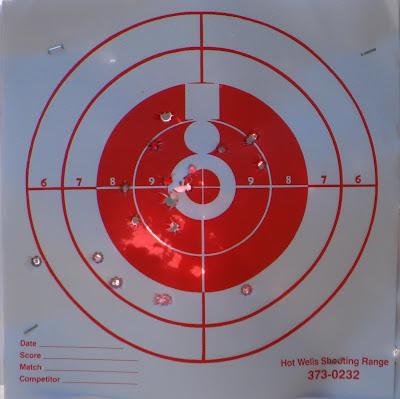 The sun was setting as we packed up from the pistol range and made the final attempt to get into a rifle slot. All the 25 yard stations were occupied. So we punted, and the folks at Hotwells were kind enough to give us a refund for the rifle range tickets. The range officer apologized, and so did the young man behind the cash register. I just told him, "I'm glad to see you guys so busy". "It means business is good, and you'll be here the next time we come here to shoot."

Tomorrow, the Lovely Belle will post about the Tut exhibit, in a much more eloquent manner, and the ammo which she was requested to test. She cleaned the XDM, (the speed with which she can do that is a little unnerving) before today's shoot. We ran 50 Remington rounds through it, and then she cleaned it again on the bench. You'll just have to wait until her forthcoming post for the results.
Posted by kx59 at 8:55 PM