We spent this weekend down at the crik again, where the wind was blowing and we got some rain.

Driving down on Friday evening, I had to stop and take a few photos of the rainbow that greeted me. 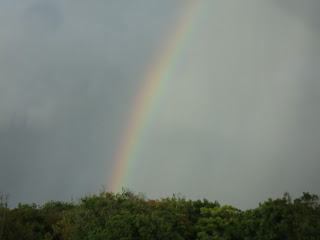 Once I got to the house I had a great view of the rainbow which was in full arc, however, I couldn't get the whole thing in my camera view, so you'll have to settle for the top part of it.  I kept thinking of the song "Over the Rainbow" but changing up the words a bit to fit a parody on the smelly hippies who are occupying our cities and Wall Street. 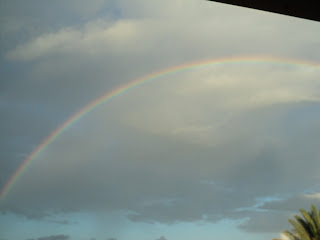 So after unloading the car and putting things away, we made the short trip to our favorite spot on the intra coastal waterway and had a nice meal.  I had the flounder (sorry no pics of food here) and hubby had his usual fish basket.  We both had a few drinks, he had beer and I had wine, and then after we got back to the house more adult beverages and a great time commenced.

This pic is the edge of the porch at the restaurant and you can see the lights from the swing bridge in the distance. 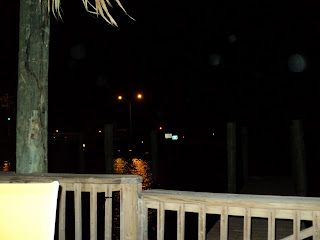 So, after nursing a hangover on Saturday morning, we just basically hung out around the house, enjoyed one another's company and then early evening, it was back to our favorite spot on the water for dinner.... 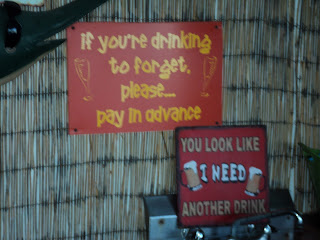 These two signs hang behind the bar on the patio so we had to get a photo of them.  Then our appetizer arrived.  This is a spinach artichoke dip with crap meat on top.  The chips are fried flour tortillas.  This  dish was fabulously yummy. 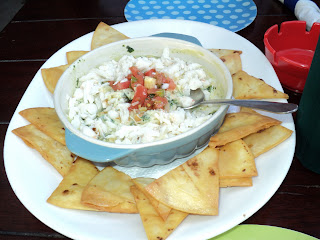 This is the swing bridge on the intracoastal waterway which allows boats and barges through.  The road goes to the beach. 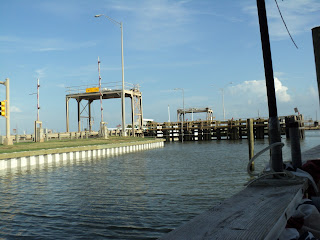 Here's a sail boat going through the swing bridge.  Not something that we see too often down here.  Our little town is a fishing town and so sailing just isn't really something that you see folks doing. 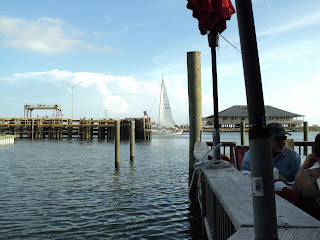 This sign totally cracked me up.  It hangs over the entrance to the bar area at the restaurant.  Click to make big so that you can read it. 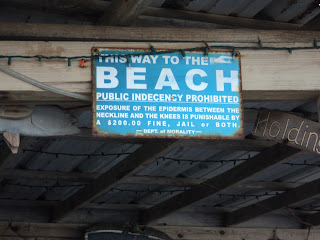 As we were leaving the restaurant, we were walking along the pier at the entrance of the place and these two women were in front of us who seemed like they had a few drinks in them.  I was kind of looking out at the water when suddenly one of the women turned and started to double back, almost running into me.  As she did this, she looked up at my hubby and said, "I'm going to go pee."  It took every ounce of self control to contain our laughter until we were in the car.  Both of us wanted to say, "well alrighty then, you go on ahead".
I'm sure that the lady was talking to her friend, but god it was funny.


So really that's about all we've been up to this trip to the coast.  Last night we had some thunderstorms roll through which kept waking me up at all hours of the evening.  Between the storm and the wind howling it was not a restful sleep.  In a while, the hubby and I will clean up the house (which there's not much to do this time), lock up and head back to base.  I do look forward to sleeping in my own bed tonight.