Truth be known, we should have probably gone to the golf range and hit a bucket of balls, being that we have a golf tournament coming up soon. Neither of us is really a golfer, although Belle will tell you that she'd like to be. I like shooting better. I don't have to chase down my projectile.  We took the Tokarev, the little 22LR saddle gun and Belle's beloved Alexa (XDM).  The Tokarev was hit and miss, feeding from the magazine. We are looking into sourcing an aftermarket mag for it to use for shooting. The last gunsmith told Belle the problem resides with the original magazine. The 22LR saddle gun hadn't been shot in ages and cycled through about 50 rounds before it jammed, and jammed but good. Needed cleaning.
Yours Truly, shooting the saddle gun ( my good side, all hat and ears ) 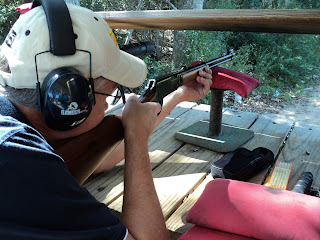 While I trudged off to the gunsmith with the 22 to get some help with the egregious jam, Belle proceeded to drill the Bullseye dead center with the very first round out of Natasha. Rounds from both rifles were run through these targets.
Belle's Target: 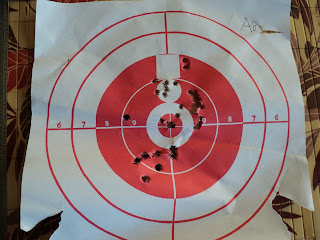 Don't mess with the Zohan Southern Belle.
Kx59's Target: (one little 22lr solidly in the bull) 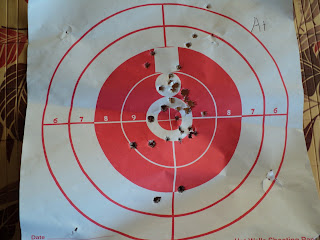 With me, it's more like feeling for the center. With my eyesight and bifocals, I can't actually discern the bullseye at 25 yards. But, I know it's there somewhere.
Our targets from shooting Belle's XDM at 7 yards.  It seems the harder I tries the worser I shoots. Once I dial down the GSF*, and settle in I get more rounds in the red parts. I got more in, than out, so I 'm good with that.  Belle is still having troubles with shooting low and left. (perp is still dead, but it annoys her) 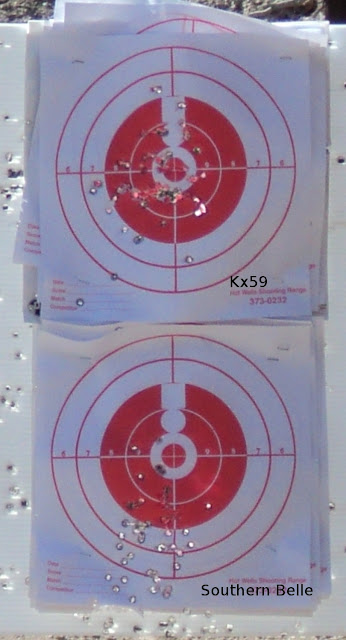 After the afternoon's recoil therapy, we headed over to our favorite Vietnamese Bistro for a late lunch.  I feel good all over now.  I've spent a lot more time shooting shotguns than rifles or pistols.  My old 22 is just anticlimactic after shooting Belle's Tokarev.  When you pull the trigger on her SVT 40, you know you have shot a Rifle.