Dammit I want to sleep on the cow peel

My little Poodle, Penny has been using the hubby as a Poodlevator since I brought her home.

She's a toy Poodle and very sweet, but she would walk up to him to be lifted to the couch.  She would, for whatever reason, bypass me and go to him to be picked up.

Finally, the hubby grew tired of it (because every time one of us got up from the couch, so would she, only to want to be lifted yet again) and stopped picking her up so she was forced to snuggle up in her bed on the floor because she just doesn't like to come to me to be picked up and placed on the couch.

So a few minutes ago, Penny decided that she would reveal her secret to us.  She jumped onto the loveseat all by herself and curled up to go to sleep.

We always assumed that she just couldn't jump that high, which is why hubby consented to lifting her to the couch.  I guess she fooled us!

Here is a pic of Penny sleeping on the cow peel.  For new readers, if you want a reference to why I'm calling it a cow peel, go here, it's entertaining. 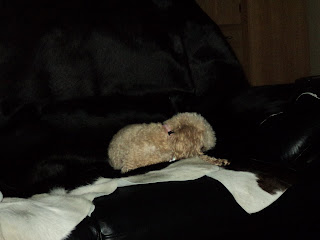