This morning, I drove to to Hempstead and went to the Farmer's market there. I was literally in produce heaven. They had all kinds of home grown produce at wonderful prices. One of the first things that caught my eye were the giant watermelons. Hempstead is famous for their tasty watermelons so into my cart went a nice sized watermelon. Another thing that caught my eye were the strawberries. I bought a huge container of them of and when I got home, I had a nice bowl of them for a juicy snack. 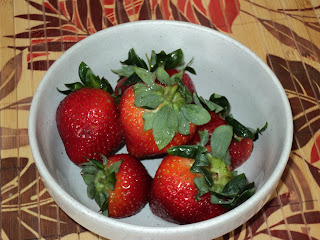 They were so juicy I needed a napkin as the juice ran down my hand when I bit into them.

I also bought some zucchini, yellow squash, tomatoes, potatoes, lettuce, cucumber and some other odds and ends, including strawberry jam (locally made) and local honey.

One thing really caught my eye when I was there and when I spotted them from across the aisle my eyes lit up and I raced over to grab some up. Green tomatoes. You cannot find green tomatoes anywhere around here unless you go to a farmer's market.

I picked out some of them and brought them home and made fried green tomatoes. I think that I am in fried food paradise at this very moment.

Here are the tomatoes all sliced up and seasoned with Tony Chachare's Cajun seasoning or plain old salt and pepper works well, too: 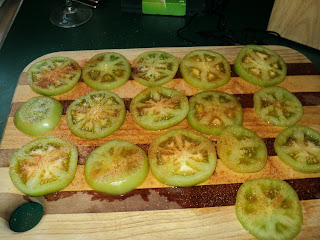 Then, I take each one and coat them in a flour and italian seasoning mix, then make up an egg & milk batter and dip them in that, then coat them again in the flour mix. I fry them up in olive oil, turning when browned, then pulling them out when browned on the second side. 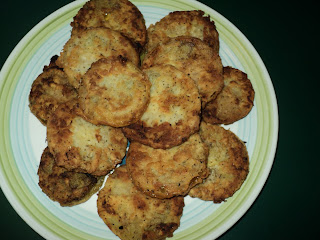 Posted by Southern Belle at 9:51 PM