Literally,
I cannot quite find a suitable analogy to describe what it is like to meet fellow bloggers face to face. Real gunnies. A category in which I do not include myself. I can't thank you guys enough for participating: Alan, Tomscathanger (he's an absolute hoot), Borepatch (epic or what?), Mark, and the man with the wickedest cowboy eye squint I've ever seen, YeOldFurt.
I'll be mentally processing this for days I think. There was so much to take in
We brought the Southern Belle Armory, the infamous Tokorev and two of my shotguns. No shot allowed on the target range, so we brought rifled slugs. The custom built high tech toys to the right belong to Tomscathanger. They have names and numbers of which I have no memory whatsoever. (that's my story, and I sticking to it.) 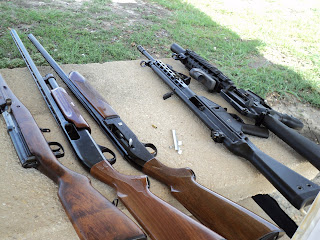 Borepatch lines up on the target with Ye Old Furt's secret weapon, of which Borepatch will post tomorrow. Alan observes. 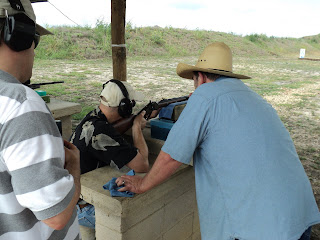 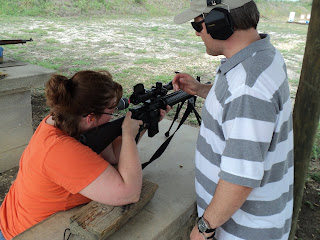 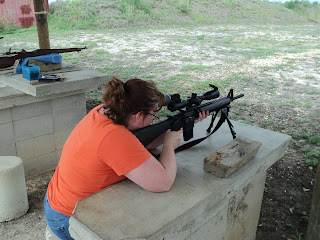 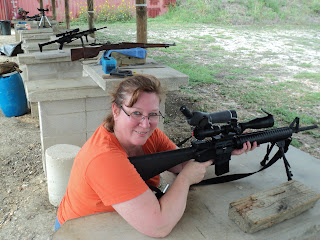 No, I did not steal this pic from Borepatch's blog site, that's actually me shooting YeOldFurt's bolt action rifle. (but it does look an awful lot like his handsome profile shooting the M1 Garand doesn't it?)
Yoiks that rifle was sighted in good. I need YeOldFurt to post a comment on the particulars of the weapon if he is so inclined. 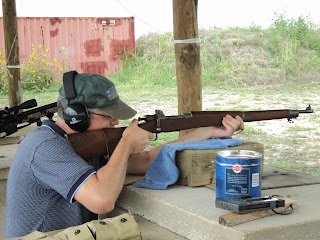 Off to the pistol range. (click to enbiggen). The muny shot, juuuust to the left of the center X belongs to the Lovely Belle. The two dead level shots much further south in the nads belong to me (yes, I did do that on purpose) 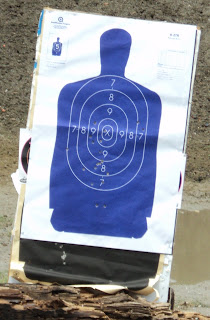 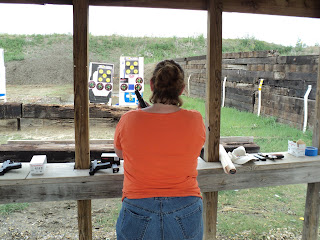 Not only does Borepatch's jeep tell lies about the temperature, but his sweet 1911 makes unseemly passes at strange men. I had the opportunity to shoot said 1911. I swear that when I picked it up and sighted in, it whispered, "hold me tighter". The center target was my magazine. I don't even know how many rounds went through that same hole, but it was a lot. When done, I turned to Belle and said, "that was so good it was scary". 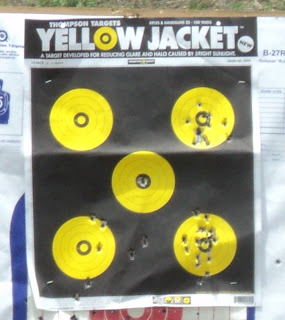 I wish I hadn't been so hungry and sweated out. This is a quick camera shot standing in front of Black's Barbecue looking back towards the town of Lockhart. I so wanted to walk down there and take more pics..but..there was the smell of Texas Barbecue in the air. 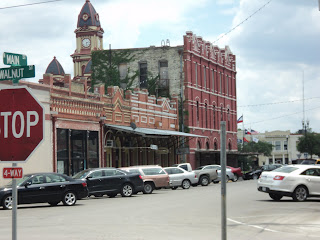 On the road headed home to Cypress, the end of a really good day. 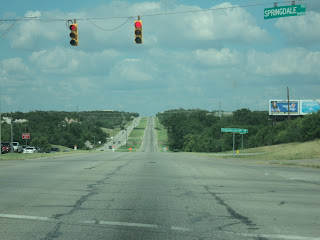 Belle warned to slow down in Giddings...speed trap. No worries says I, I have a decoy. See that red car that just blew past? 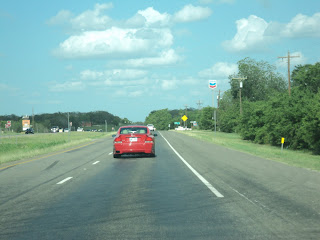 What an awesome day guys! I can't tell you how great the camaraderie, education and coaching were for me.
Posted by kx59 at 7:57 PM