Shortly after my better half and I were married, he bought me an Australian Cattle Dog, otherwise known as a Blue Heeler.  His name was Patch. 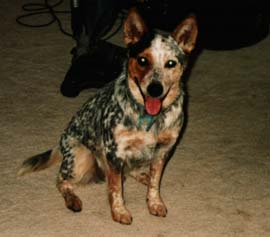 He was very protective and his herding instinct was great.  He would herd the kids and try to even herd me, though asserting my dominance early on, he knew better than to do that often.  He was probably one of the most intelligent dogs that I've ever known.

Over at Lagniappe's Lair there are great stories about Murphy the beautiful German Shepherd.  More specifically, about Murphy's recent swimming adventures.

This of course reminds me of Patch and his love of the water.  It's a bit unusual for a herding dog to love water like that, but Patch really did.

We would be down at the creek and Patch would get hot and decide to go for a swim, or simply lay in the creek.  If I went kayaking, I had to really be careful because Patch would almost always swim out to my boat and try and follow me.  I didn't want him to tire out, so I would have to send him ashore and tell him to stay, which he would, reluctantly.  He didn't like that though, especially once I got out of his sight, but he would sit there and wait for me to return, ever so faithfully.

The first time that the hubby and I took Patch on the boat and to the cut, (where the end of the creek meets the Gulf of Mexico), he loved it.  He was about 5 months old and in short order proved himself to be just like his mommy (me) a salty dog.  We are called salty dogs because the salt water is in our blood and we are drawn to it and we thrive in it.

So, we beached the boat and as I was setting anchor, Patch jumped out of the boat.  He ran up and down the beach, in and out of the water, chasing and biting at the waves.  He was having a grand old time until he noticed something funny in the water that looked they were lost.......   about 20 hermit crabs walking along the bottom.

Patch, being the helpful pup that he was, was in water up to his chest, and yet he dunked his entire head, eyeballs, nose and ears (well the tips were still out of the water) under the water and gathered up each hermit crab one by one and piled them up on the shore.  Once he had the vast majority of the poor things, he laid down behind his pile of displaced crabs and watched them.

He was something else and every now and then, I miss him terribly.  About three years ago, I had to put Patch down because he snapped at my grandbaby and I wasn't going to take the chance that he would bite her.  He was starting to even get cranky with me so I had to make the hardest decision of my life.  He was 10 years old but I will say that he did have a very good life.  He was loved.

Posted by Southern Belle at 9:28 AM

Email ThisBlogThis!Share to TwitterShare to FacebookShare to Pinterest
Labels: From the Heart, Humor, Stories