The small voice in the back of your head and grilling steaks.

I am the laziest griller you will ever meet, this not to say that I am not successful at it however.
Belle brought back two nice T-bones from Chapel Hill and we decided to "grill" them tonight.
Apparently, global warming is real as I saw that the ambient air temperature was north of 250 degrees when I went out back to survey the results of the redneck irrigation system. 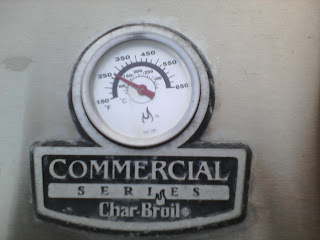 oh, wait, that thing must be broke too, I'm not on fire.
That small voice:
Starting the gas grill is always fun. The spark lighter works..sometimes. These days I most often use a long nosed butane lighter to git er goin. Long nosed butane lighter is no where to be found. I whined to Belle that I don't like lighting it with kitchen matches because it burns off what little hair I have on the back of my hand.
So I take the long barbecue tongs and a box of kitchen matches out to the luxurious tenbyten concrete patio thinking that I'll clamp a kitchen match in the tongs, light another match, light the tong clamped match, turn the knob and light 'er up. I apparently channeled Mr. Ford, because I had a better idea in the three steps to the grill. I'm hearing that small small voice that tells me this is not a good idea. This time, I elected to listen.
Small small voice tells me, "perhaps you can get the spark lighter to work". Perhaps I can, says I.
The button is stiff, the casters on the grill are not in the "upright and locked position, please turn off all electronic devices in preparation for lift off".
I simultaneously turn the first gas knob and push the button, a waft of propane reaches my nose as the grill scoots away from me toward the edge of the patio. Small voice says "STOP" and " TURN OFF THE GAS". I'm feeling proud of myself. I listened twice today. There's been times when the small voice didn't even speak up, but that's another story.
So I wedged my foot under the grill to keep it from moving and mashed the hell out of the button. The sweet tick tick tick sound told me turning the gas knob would be a good idea right about now.
Grilling heresy:
I don't exactly "grill". My technique is what I refer to as the "lazy man's approach". I developed this technique over many years of cooking over charcoal. I'm still trying to adjust to the gas grill. It has been hit or miss with my particular "grilling" style.
With charcoal, I place a decent sized pile of charcoal banked to one side of the Weber grill and get a good hot bed of coals going. I baste the steaks in Worcestershire and the seasoning of the day, lime pepper or Tony C's, perhaps a bit of garlic, crusted heavily to compensate for the inevitable exfoliation when the meat hits the grill. Seer both sides well, then move the steaks to the opposite side of the grill. Place the lid on the grill (heresy), with the lid vent on the opposite side from the fire. Open the vents so that the heat travels a path over the steaks and out the vent.
The most important step is next. Go inside, in the air conditioning, crack a beer and make a blog post.
Every once in a while, go out and flip the steaks, poking them with the tongs to test the jiggle factor. On the poke that they no longer jiggle, they are medium rare, beautifully and uniformly pink between the seared surfaces.
With the gas grill, choking off the heat for a slow cook after seering by closing thelid is not an option, as the flame tends to go out. More frustrating is that the gas grill is designed to keep you from doing this.
So I find myself having to run check on the steaks much more often. With the charcoal, I know just how many beers it takes.
Posted by kx59 at 8:20 PM