Range Report from the Belle - 2

Well, what a great time I had at the range today.  The Tokorev kept wanting to jamb up so we ended up just breach loading, which was actually much easier and quicker than constantly having to clear the rifle over and over again.

Today, the son and the hubby went with me.  We shot 60 rounds of ammo, though 40 of the 60 were mine as the men's shoulders were getting a bit sore.  The last round the son shot really hurt him as he didn't seat the rifle properly and it caught his collar bone (ouch).  I'm not sure if he'll bruise up or not, time will tell on that one.

The hubby just hasn't been shooting as often as me and so his rifle shoulder is a bit out of shape.  I'm sure that I will feel sore later but for now, I'm just feeling all warm and fuzzy over all, because I shot really well today.  In fact, when we got home I said, "AH What shooty goodness!"

So here are a few pics for your amusement and for you to ooo and ahhh over (okay, just kidding, really) 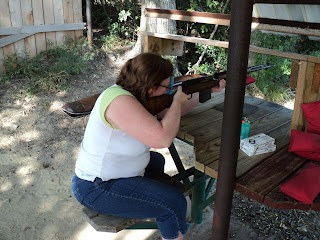 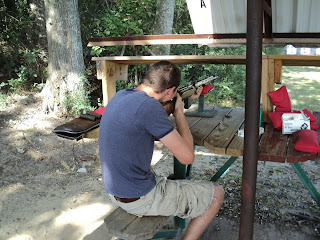 My favorite son, well okay he's my only son but a good guy none the less! 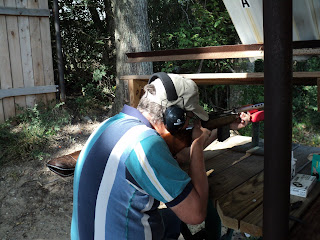 And my better half, the devilishly handsome KX59.
I am really thankful that my two men are so patient.  They stood around after they were done while I finished off the last box of ammo.  They were ever so patient and were really good about making my morning a fun one!
So, we were able to get our targets this time and I brought them home.
First up we have a shared target between my favorite son and I, this was before the first target change time out. (you can of course click to make bigger). 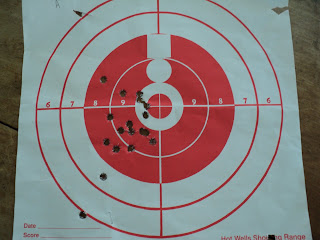 Next target is mine alone from the second target.  I was very pleased with  my grouping in the middle.  We've figured out that our sights or either off, or because it's made for long range shooting that perhaps we're shooting too close in.  We were at 25 yards this time, I think next time I will try her at 50. 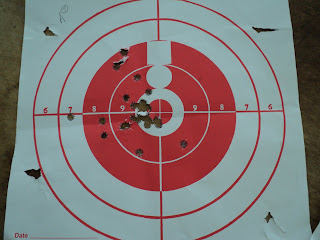 The next targets are my better half's all to himself.  First and second targets, respectively.  He did really well, I thought. 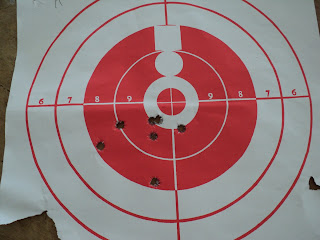 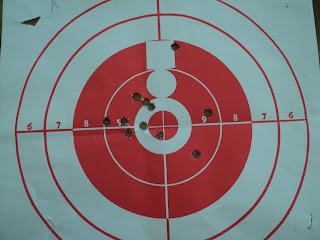 All in all, it was a pretty good day.  Very little wind.  I am definitely getting the gunsmith to look at the sights to be sure that they're sighted in correctly.
What a wonderful day so far and it's sure to only get better!
Posted by Southern Belle at 12:13 PM